How radio jets may impact the evolution of a galaxy

The impact of a radio jet on the gas within the host galaxy is generally not considered important in stopping galaxies from growing. Our finding of a low-luminosity jet single-handedly emptying the cold gas from the centre of the galaxy shows that reality may be quite the opposite.
Suma Murthy and Raffaella Morganti
2 contributors
Like Liked by Evelina Satkevic and 1 other
0

A young and low-energy radio jet has cleared a substantial amount of gas from the central region of galaxy B2 0258+35, demonstrating the effectiveness of kiloparsec-scale feedback from radio-loud active galactic nuclei and supporting the predictions of simulations.

Galaxies grow by accumulating gas from around them and forming stars. This growth, however, does not appear to go on indefinitely despite the availability of gas. It is believed that many physical processes in action from within the galaxy could potentially cause this inhibition. Supermassive black holes that inhabit the centres of galaxies may give rise to one such process when they are 'active'. These active black holes, called active galactic nuclei (AGN) emit an enormous amount of energy in the form of electromagnetic radiation and/or collimated radio jets, and in principle, can remove the gas from the galaxies.

Various models of galaxy evolution assume this to happen in two ways: (i) strong electromagnetic radiation drives the cold gas out of the galaxy (ii) radio jets which can grow to sizes larger than the galaxy can heat the surrounding gas to prevent it from cooling and falling inside, essentially cutting off the gas supply. Radio jets are not considered to have an impact within the host galaxy. However, since they have to first expand through the galaxy before getting out, we would expect them to impact the gas around them in some way.

Hot on the trail of a low-luminosity radio source

To understand and quantify the impact of radio jets on the gas they directly encounter within their host galaxies, our group has been tracking down suitable sources and studying them in great detail. Thus it was that we got interested in B2 0258+35, a low-luminosity radio AGN. Such investigations involve multi-wavelength studies at different spatial resolutions to trace different phases of gas, their properties, and the evolutionary history of the radio source and as a consequence, take a long time. This study is no exception.

Over the last decade and a half, we have almost grown fond of this galaxy. At first, we saw its huge atomic gas disc and the bright radio source in the centre, and then a pair of large -- almost 200 times larger than the central source -- low surface brightness lobes; it has been through multiple episodes of AGN activity; the radio source in the centre is interacting with the ambient gas; the circumnuclear atomic gas is highly turbulent; and most importantly, the radiation from this AGN is low implying that if there is any impact on the gas, it must be due to the radio jets. The last revelation was particularly interesting because low-luminosity radio sources dominate the radio AGN population. If the impact of the jets can be cleanly disentangled from the impact of radiation, then it is possible to quantify the role of these radio sources in the evolution of their host galaxies.

Building upon all our previous knowledge of this source, we decided to see what the radio jets are doing to the molecular gas -- the direct fuel for star formation. We used the NOrthern Extended Millimeter Array (NOEMA) telescope for this purpose and observed carbon monoxide (CO), a popular tracer of molecular gas. We were hoping to detect a circumnuclear molecular gas disc into which the jets are expanding, making the entire structure turbulent.

What we saw exceeded all our expectations. Circumnuclear gas there is, but we do not see the disc at all. Radio jets are expanding into the ambient gas that isn't quiescent, but turbulence is not all that is present. If at all there was a gas disc at an earlier stage, we saw that the radio jet has actually ripped it apart and is driving ~75% of the gas away in the form of a fast outflow! A fraction as high as this has to have an impact on the evolution of the galaxy. B2 0258+35 is the first for a low luminosity radio jet doing this single-handedly, second for the molecular-gas outflow in radio galaxies being spatially resolved and perhaps third to none.

For a long time now theoretical models of jet-gas interactions have been predicting a similar impact of radio jets on the ambient gas. They say radio jets cause a lot of mischiefs: the highly turbulent gas, the high-velocity outflows, the short timescales of gas depletion, and all this when the radio jets are of low luminosity, very similar to our observations. A comparison with a numerical simulation of jets expanding into a gas disc without even fine-tuning it to B2 0258+35 allowed us to quantify these similarities and confirm these predictions.

All these together tell us that low-luminosity radio sources may in fact have an important role to play in galaxy evolution and theoretical models may want to consider them more seriously!

Prof, ASTRON and University of Groningen 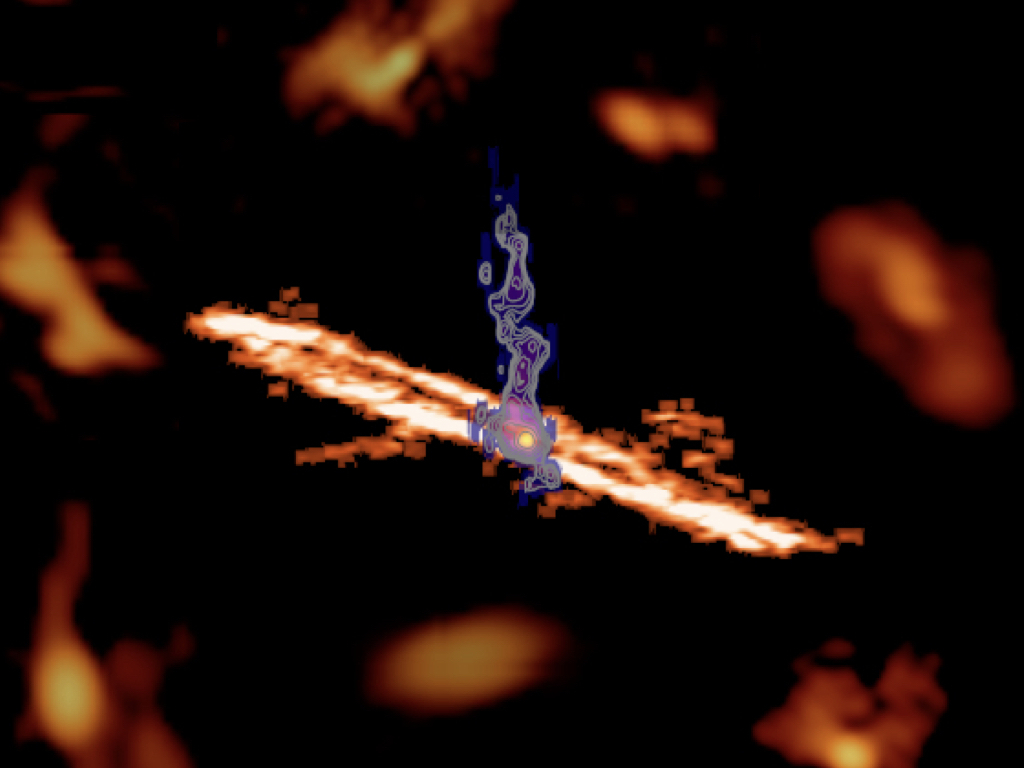 How radio jets may impact the evolution of a galaxy

The impact of a radio jet on the gas within the host galaxy is generally not considered important in stopping galaxies from growing. Our finding of a low-luminosity jet single-handedly emptying the cold gas from the centre of the galaxy shows that reality may be quite the opposite.