Two further radio bursts associated with magnetar SGR 1935+2154 have been detected with a Westerbork 25 m dish, bringing the total to four. These observations demonstrate that SGR 1935+2154, a putative Galactic analogue of a fast radio burst source, can emit bursts across seven orders of magnitude i…

So, this was meant to be a non-detection paper. But then we actually did detect something. In the very last run of our first campaign! But let's start at the beginning.

For more than a year now, we have been monitoring repeating fast radio bursts (FRBs) that were identified as such by CHIME/FRB. We are using a subset of telescopes that are also part of the European Very long baseline interferometer Network (EVN) to try and localise these enigmatic sources. The aim is to assign host galaxies to the FRBs that we detect and to determine the environment they reside in. Eventually, we want to draw conclusions about the type of stars that generate these millisecond-duration, extremely bright radio bursts.

On 28 April 2020, the CHIME/FRB Collaboration and the STARE2 team independently detected a burst from the Galactic magnetar SGR1935+2154. This burst was just as short as FRBs and it was so very bright, that it could have been seen by an alien civilisation looking in the direction of the Milky Way with telescopes as sensitive as FAST in China. To them, this radio bursts would have looked just like the FRBs we see from extralactic space. Thus, this was the very first Galactic FRB and it originated from a type of star we know -- a strongly magnetised neutron star called a magnetar!

Excited by these findings we developed a plan to conduct regular follow-up observations of the source across as large a bandwidth as possible. Having access to the telescopes that we use to localise the repeating FRBs from CHIME/FRB, we decided to use our resources in a very unconventional way: instead of all participating stations observing at the same frequencies -- which is an absolute must if one does interferometry -- we tuned each telescope's receivers to a different wavelength. The reason behind this is as follows. The FRBs that have been detected from cosmological distances have very patchy spectra, i.e. they are not visible across a large bandwidth but only ever across 50--200 MHz, sometimes even much less. What's more is that they don't always burst in the same frequency range but instead do so in a diverse range. Thus, if this magnetar was to behave like regular FRBs, then we would have a larger chance of detecting it when covering as large a bandwidth as possible. Using the regular VLBI backends (DBBC2 for the technically inclined) on up to four simultaneously observing telescopes, we were able to cover the range from about 300 MHz all the way up to 8.5 GHz (with gaps here and there, obviously).

With our stations in The Netherlands, Poland, and Sweden, we monitored the star for up to twelve hours almost daily. During the observing breaks we processed the data, hoping for a burst to pop up. Every now and then during the first weeks we heard of X-ray bursts that were detected from the star but we found nothing in our data. After three weeks morale was at a low and we started to write up a non-detection paper. Not finding anything DOES tell us something about the source after all. After four weeks only the Westerbork telescope in The Netherlands was still observing, the last run finishing on 25 May 2020.

It took us about two weeks after that to catch up on the data processing -- it wasn't until mid June that we got to looking at the very final observation. And what a run it was! Among the regular man-made signals we found not just one but actually two bursts separated by a mere 1.4 seconds! Moreover, the bursts were not just barely detected but they blasted in at a signal-to-noise ratio of close to 100. Considering the fact that the telescope we used was not one of the most sensitive stations, this meant that the bursts were really energetic. From there on things went very fast. Traveling restrictions due to the Corona-pandemic meant that we could not hop on a plane and meet somewhere to discuss and analyse our findings together. Instead, we had to rely on Slack and Zoom calls like so many other international teams these days. We split the work and within about four weeks we managed to turn a non-detection paper into an article that caught the interest of Nature Astronomy.

Our findings demonstrate that SGR1935+2154 emits bursts that span more than seven orders of magnitude in brightness. This raises the question of whether one and the same physical mechanism can account for all of them. Moreover, we show that the polarimetric properties of the bursts are diverse, much like what is seen for different bursts of one and the same repeater and also for bursts from (apparently) non-repeating FRBs. Clearly, at least some FRBs can be generated by magnetars at cosmological distances. If they all emit bursts across many orders of magnitude in brightness then FRBs might be a lot more common than we think and potentially all FRBs are, in fact, repeaters.

Kiran K Mankame
about 2 years ago

Congratulations, Franz and team. What causes the FRBs, and why don't they burst in the same frequency range? 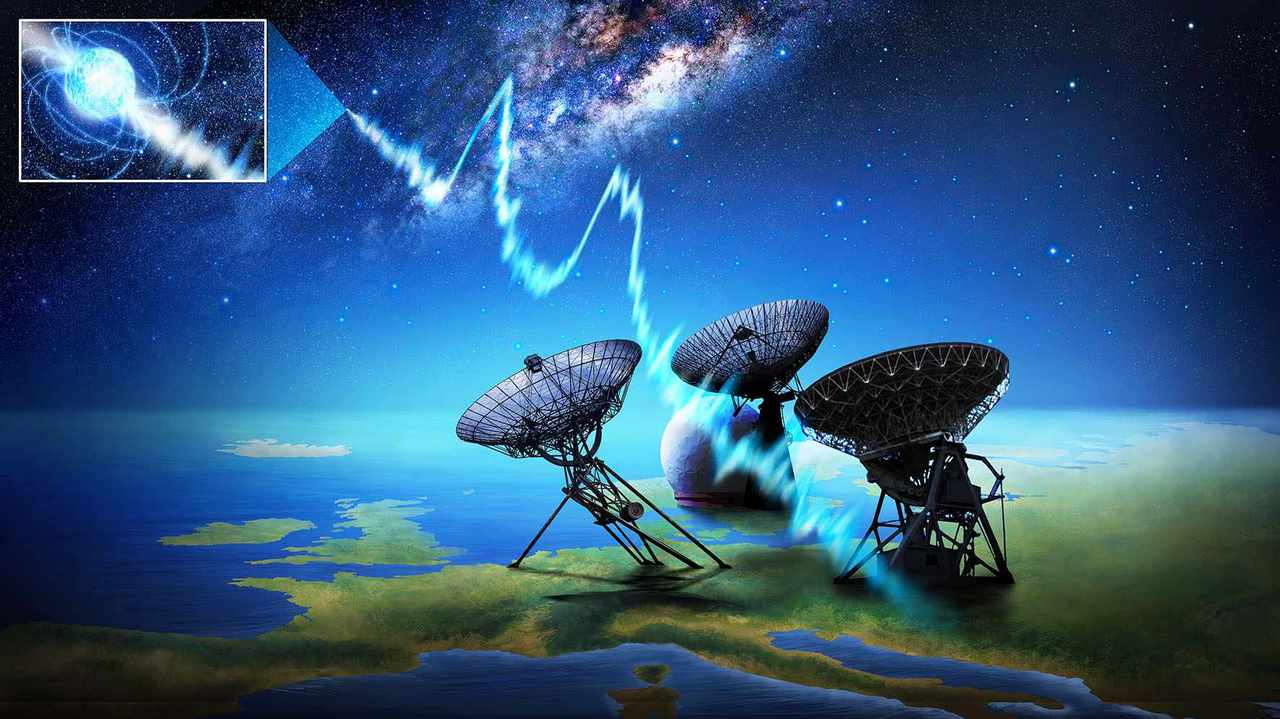