Modelling of the gas excitation along the path of black hole jets suggests a more complex picture than previously expected, with the jet passage effecting pressure changes that could enhance or suppress star formation.

Galaxies are evolving structures. They evolve over time by changing morphology and by converting gas, from which they were initially made, into stars. This conversion occurs thanks to the gravitational collapse of dense clouds. Often, galaxies evolve rapidly because of violent processes such as collisions between them, or energy release from the accretion of matter onto supermassive black holes in their centers. The latter phenomenon leads to winds that entrain material from the clouds that they encounter, and to shocks that compress these clouds. Thus, it is theoretically predicted, that the conditions for star formation can change in winds.

The most direct link between black-hole-driven winds and star formation is the discovery of newborn stars embedded in them. However, this is a challenging experiment, as the signal from the few young stars in the wind is often buried into the signal of many (million or billion) other stars of the same galaxy in the line-of-sight of the observations. A team of scientists led by Dr Kalliopi Dasyra, Assistant Professor of the National and Kapodistrian University of Athens, proposed a new way to study the conditions for star formation in galactic winds: to measure pressure changes that indicate a modified hydrodynamic stability for clouds in winds compared to other clouds in the same galaxy.

The team presented this idea in a recent Nature Astronomy paper entitled "Linking pressure gradients with the stability of molecular clouds in galactic outflows".  The gas density and temperature needed for the pressure computations were obtained by means of modelling the observed spectral line emission of dense clouds and of their surrounding ionized gas in the nearby galaxy IC5063. At a distance of 160 million light-years away, IC5063 is a frequently studied object due to a special feature: it contains black hole jets travelling through a dense gas disk, colliding with clouds, and depositing energy onto them. Jets are collimated beams of charged particles that travel at high velocities as they got ejected from black holes. Jets form when charged particles that were initially infalling toward a black hole got trapped by electromagnetic fields. Because jets are observable (in radio images), they show the exact regions of a galaxy where winds are generated and energy is injected into the gas, exciting it and making it emit spectral lines.

Carbon monoxide (CO) and formyl cation (HCO+) lines, observed by the Atacama Large Millimeter Array (ALMA), were used for the internal cloud pressure measurement. The intensities of the molecular lines were modeled with an astrochemical radiative transfer code (3D-PDR), revealing the gas conditions that reproduce the observations. Optical ionized sulfur ( [SII] ) and nitrogen ( [NII] ) lines, observed by the Very Large Telescope (VLT) MUSE instrument, were similarly used for the diffuse gas pressure measurement, considered to be external to molecular clouds. The combination of these measurements led to observationally unprecedented findings. Both the internal and the external pressure of clouds increased due to the interaction with the jet. However, depending on which of the two pressures changed the most, which depended on the interaction geometry and strength in each galactic location, both compression and dissipation of clouds were found to be possible. So, conditions of both enhancement and suppression of star formation were simultaneously found in a galactic wind. Given that winds can travel very far from a galaxy’s center, this study showed that supermassive black holes, even though they are located at the centers of galaxies, could affect star formation galaxy-wide.

The same team of researchers has been awarded James Webb Space Telescope (JWST) time, during its 1st cycle of operations, to reveal at an exquisite resolution where and how is the gas of IC5063 excited. By observing the emission of molecular hydrogen (H2) of a few hundred or thousand degrees Kelvin, the outer layers of clouds will be probed, and a more detailed study of their pressure and  hydrodynamical state will be performed. Because the used spectral lines are often bright and easy to detect, even for distant galaxies, the proposed method can be a useful tool for similar studies with the JWST, even in the high-redshift Universe. 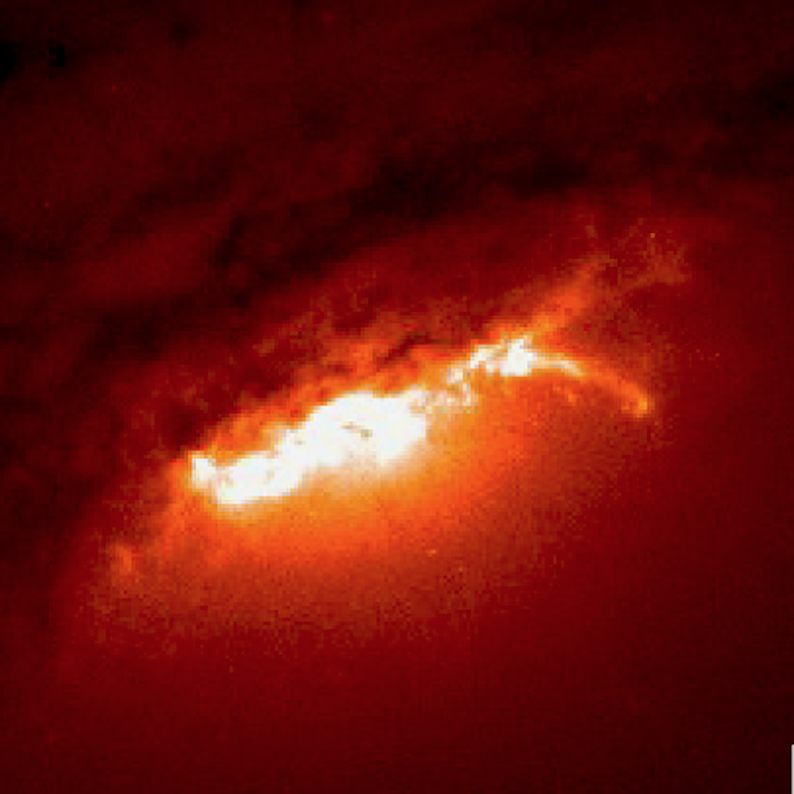