The intergalactic medium (IGM), the filamentary web of plasma making up the space among galaxies, occupies the vast majority of the volume in the Universe. In the early Universe at redshifts higher than 6, intergalactic metals have already been identified by metal absorption lines in the spectra of background Quasi-Stellar-Objects (QSOs) out to z > 6. The presence of such cosmic metals in the early Universe raises fundamental questions: what are their sources, and how did they get there? 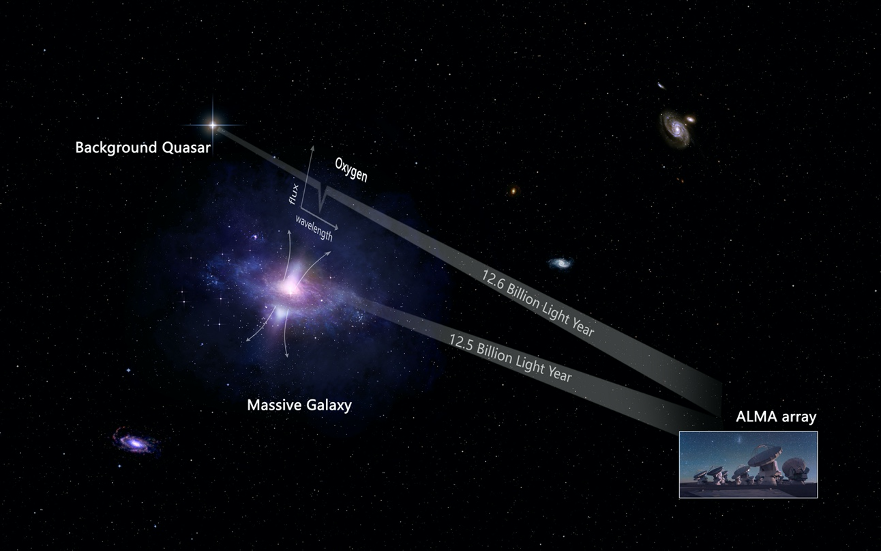 To answer the above fundamental questions, locating the source galaxies that are associated with IGM metal absorbers is crucial. Cosmological simulations suggest that the majority of the IGM should become metal-enriched due to the galactic feedback from low-mass galaxies.

Most observational searches in the optical only yields non-detections, implying the low mass nature of source galaxies, consistent with simulations. Nevertheless, searching for galaxies only in the optical may be biased, because galaxies (especially high-redshift massive galaxies) may be obscured by dust. Submillimeter probes are therefore important as light at these wavelengths is transparent to dust. Thus, we have conducted the first deep observations using the Atacama Large Millimeter/submillimeter Array (ALMA) to search for source galaxies associated with IGM absorbers at the reionization epoch. The pilot field we selected is QSO J2054-0005 at z= 6.04. One of the strongest OI absorbers at z= 5.98 is present in the field toward the sightline of QSO J2054-0005.

The [C II] 158m emission lines are chosen to trace source galaxies. Based on previous works, [C II] 158m emission is regarded as a strong far-infrared line from galaxies at . Furthermore, the physical separation from the metal absorber to the source galaxy and the [C II]-based star formation rate (SFR) of the galaxy directly constrain cosmological simulations, e.g., they probe the efficiency of galactic winds in transporting metals and test the role of different feedback models (such as star formation and active galactic nuclei) in galaxy formation. Thus, we conducted our first observations using the Atacama Large Millimeter Array (ALMA) to search for the source galaxies that may cause the reionization and the associated metal-enrichment.

In the past year, after a careful data reduction, we found a [C II] emitter candidate, referred to as “[C II]2054” in our paper. The emitter candidate has a signal-to-noise ratio about 4.3. Detailed calculations indicate that the probability of finding such a 4.3-sigma source in random fields selected by our algorithm is about 0.6%, indicating the robustness of the detection.

This [CII]2054 absorber is located 20 kpc away from the background quasar sight line, and the measured [C II] luminosity of 70 million times of that of the solar luminosity, corresponding to a star formation rate of 7 solar masses per year. To conduct a fair comparison with cosmological simulations, we further converted the observed [CII]-based SFR to the stellar mass and halo mass. The converted halo mass is one or two orders of magnitudes more massive than that predicted from cosmological simulations like Illustris, Sherwood, HVEL, and FAST. We further compare our results with the recently developed Technicolor Dawn simulations. Although the Technicolor Dawn simulation has a smaller box, this simulation is designed to study the IGM metal enrichment due to galactic feedback. We found that the simulated OI absorber-associated galaxies having halo masses and correlation lengths that are both smaller by one or two orders of magnitude than our [C II]2054 system.

In summary, our current observations strongly suggest that massive galaxies may be more important in transporting metals in the IGM than the existing predictions from simulations. In the future, we plan to enlarge our sample using ALMA, and will use the next-generation telescopes (e.g., James Webb Space Telescope) to further investigate this topic. With concerted efforts from both simulations and observations in the next few years, we aim to understand the origin of early cosmic metals in greater detail. 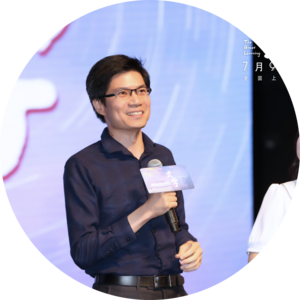 In February 2021, the InSight team attempted to 'listen' to the seismic waves produced by the tungsten blocks ejected from the Mars 2020 spacecraft during landing. Even though no waves were detected, this impact experiment can still help us learn about the subsurface structure of Mars.