With the developments of simulations and observations, we are at an interesting time in astrophysics, where we can use machine learning methods to discover new structures of the Milky Way. In this paper, we introduce Nyx, a new cluster of stars in the Solar Neighborhood.

When you are a young scientist, you aspire for these "Eureka" moments, and dream about the thrill of discovery. Once you go to graduate school, you realize that these are not moments, but rather weeks of careful checking, editing, and verifying that you have a great understanding of what you see.

My collaborators and I wanted to build an accreted star catalog: a catalog of stars that were born in galaxies outside the Milky Way, and were later brought in to the Milky Way through galaxy mergers. To build this catalog, we trained a computer program to distinguish accreted stars from stars born in our galaxy (like the Sun). We applied this program on data from the space telescope Gaia. In 2018, Gaia released the velocities and positions of 1 billion stars ---1% of the Milky way--- making it the largest catalog of stellar motion to date.

My collaborator Bryan Ostdiek, a postdoctoral researcher at the University of Oregon then, and now at Harvard University, performed the Herculean task of building this catalog. He used Ananke, a mock catalog of simulated galaxies, shown as the figure above. Robyn Sanderson, a professor at the University of Pennsylvania and a scientist at the Center of Computational Astrophysics in New York, built these mock catalogs by taking simulated galaxies, and processing them as if they were being observed through the lenses of the Gaia telescope.

Bryan messaged me one night saying "here is the catalog, have fun!" I got very excited. It was late, I had my laptop on my bed and I started plotting the data. Some features I expected were present, but I also noticed a cluster of stars that I had not anticipated (see figure below). I was so stressed that this cluster was a result of a computer bug that I did not tell my collaborators about this for three weeks, thinking of every possibility of things going wrong, until it slowly hit me that it is real; I just found a new cluster of stars that nobody has detected before.

My long time collaborator Mariangela Lisanti, a professor at Princeton University, and I had a fun time naming this new cluster. Since we wanted to name this group of stars after a Goddess, we both started googling names and exchanged a few funny ones on our chat app before landing on the perfect name: Nyx, the Greek Goddess of the night.

Nyx consists of about 230 stars that are rotating with the disk of the Milky Way, but are also moving towards the center of our galaxy. Studying their properties, we find out that they might be relatively young. Such stars are not expected to behave the way Nyx does. We think that Nyx is either the remnant of another galaxy that has merged with the Milky Way, or ripples in the disk of the Galaxy due to a previous collision, the same way you would see ripples in a pond if you drop a rock in the water.

With Alexander Ji, a postdoctoral fellow at Carnegie observatories and my old housemate from graduate school, we will observe these Nyx stars with the Magellan telescope in Chile in the hopes of unlocking their origin. So stay tuned. 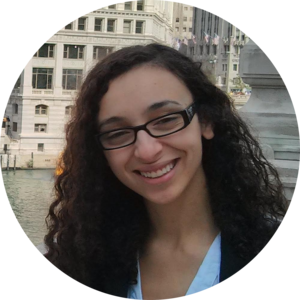