Of all the mysteries of the universe, black holes are one of the most interesting. Most galaxies, including our own lived Milky Way, are thought to harbor at least one supermassive black hole at the center, with mass of over million times that of sun. Finding a pair of super-massive black holes orbiting one another, however, is rare. It has been said that this finding is the "smoking gun” for galaxy collisions, the intertwining moment when two galaxies merge together.

Supermassive black holes, with their immense gravitational pull, are notoriously good at manifesting their existence by eating nearby objects. When a wandering star unluckily passes too close to a black hole, it can be ripped apart and swallowed by black hole. A black hole destroying a star, an event astronomers call “stellar tidal disruption”, releases an enormous amount of energy by eating and heating the debris of stellar materials. The heat is broadcast as light flares across many wavelengths including optical and X-rays. In recent years, a few dozen such flares have been discovered, spotting the existence of otherwise dormant supermassive black holes in the universe. 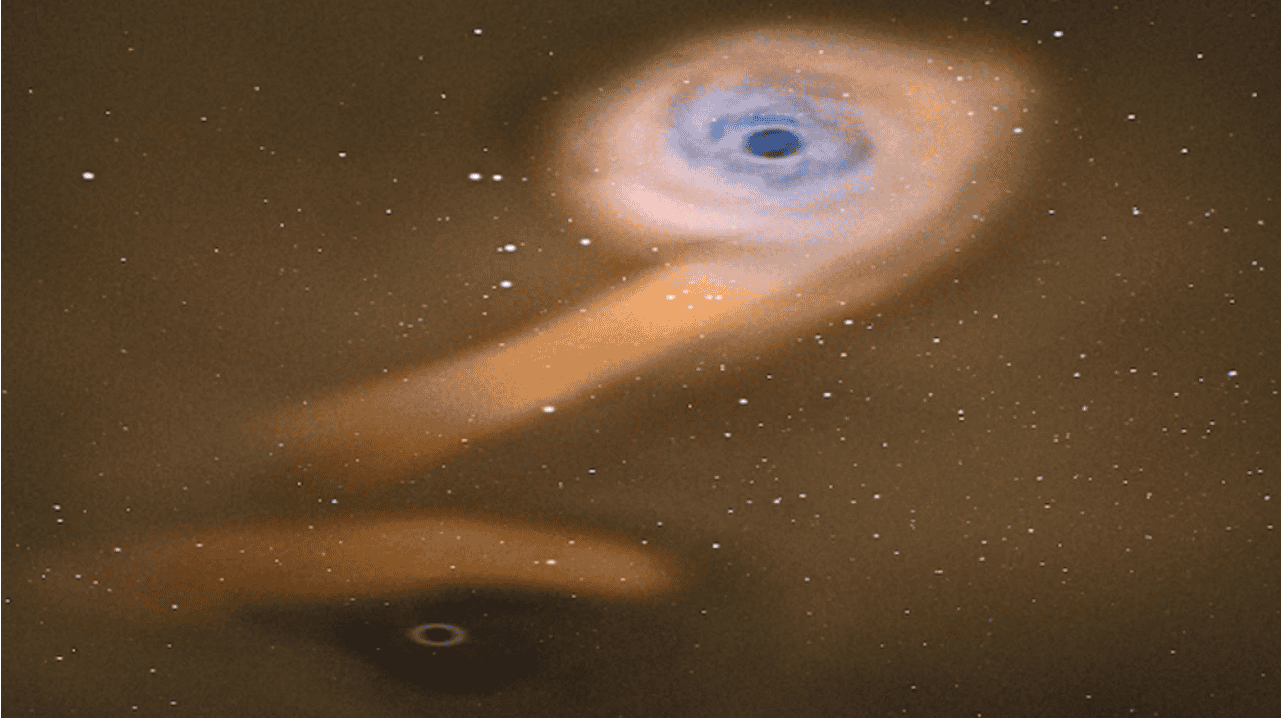 An artist's render of a pair of black holes, with the one on top accreting material from a dying star, while the one on bottom breaks the stream of debris. Image Credit: ESA/C. Carreau

On 2 Jan 2016, a stellar disruption event was found by Optical Gravitational Lensing Experiment (OGLE), called OGLE16aaa. Just a week after the optical peak, OGLE16aaa was observed with NASA’s Swift satellite, and 140 days later ESA’s XMM-Newton X-ray satellite joined the observations. We collected and analyzed the X-ray data, and found surprising results of its X-ray emission. While OGLE16aaa remains silent for 140 days after the optical outburst, it was brightened abruptly, by more than a factor of 60 active in flux than the sleeping state. Such a rapid X-ray flaring within only two weeks is unusual, and it is confirmed by an independent study led by Jari J. Kajava at Centro de Astrobiologia, Spain. But follow-up observations by Swift showed a remarkable thing: the X-ray flux from this event seems to disappear for some time after the start of the flare. Most surprisingly, about 150 days later, its X-rays reappeared. Then the X-rays fell below detectable levels and appeared again after another 150 days.

The puzzling drop-outs in the X-ray light curve had been sparsely seen after other tidal disruption events. The behavior is exactly the same as SDSS J120136.02+330305.5, the only galaxy known to date that showed signs of a pair of supermassive black holes in the process of swallowing a star. The sudden drop-outs and then recoveries of X-rays are because the gravitational tug of one of the black holes disrupted the flow of gas onto the other, which could temporarily deprive it to fuel the X-ray emission. Our models of binary black holes suggest that they will spiral together, radiate energy, and eventually merge into a single black hole about two million years from now. The eventual merger may generate a strong radiation of gravitational wave in the Universe. 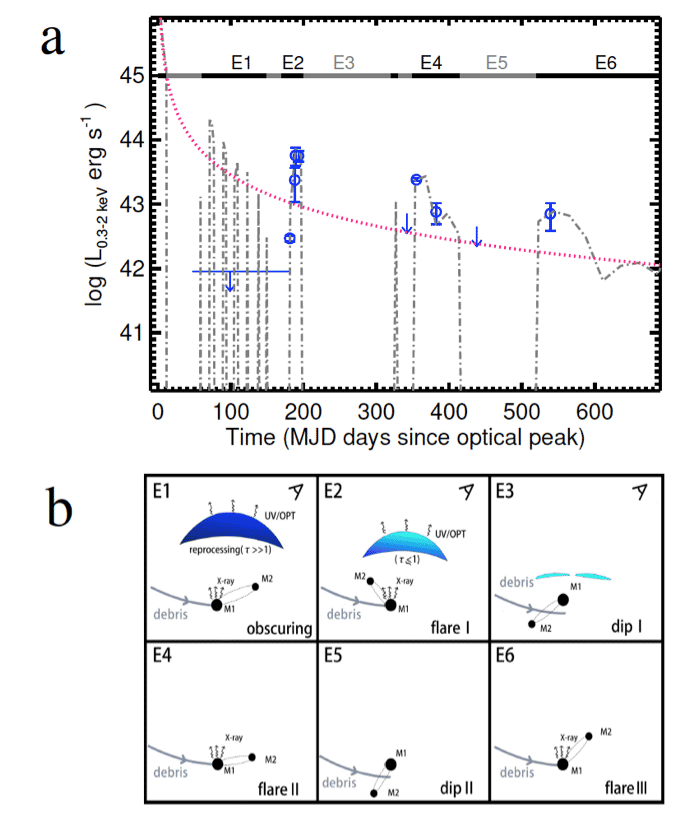 This study paves a way in searching for supermassive black hole binaries. The discovery is particularly important because it spotted a population of quiescent galaxies that may host binary black holes in their centers. Additionally, we are able to explain the X-ray non-detections in the early phase as due to the obscuration by a dense column of gas, implying that the reprocessing of X-rays may be a viable mechanism to account for the optical emission. This is promising to resolve the discrepancy between optical and X-ray emission of stellar tidal disruption events, a hot debate topic in the community. With the advent of new time-domain surveys, we expect to find many more galaxies with supermassive black hole binaries at their centers spotted by bright flares after stellar disruption. 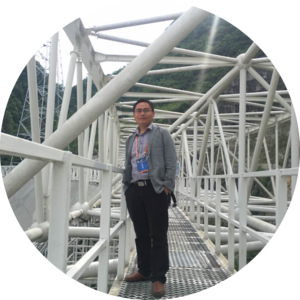