Last September, the world’s media announced that there may be life on Venus – within the droplets of the sulphuric acid clouds. We decided to examine the plausibility of this claim, focusing on the availability of water within these cloud droplets. 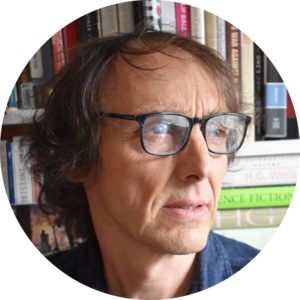 The ‘life-on-Venus’ headlines were prompted by a paper in Nature Astronomy claiming the detection of phosphine in the Venusian atmosphere – at levels that, if correct, were seemingly too high to explain geologically, and might therefore be of biogenic origin. Venus's surface is deemed far too hot and dry for life as we know it, but the researchers published an additional article to propose a scheme in which microorganisms similar to those on Earth might exist in aqueous droplets of the Venusian clouds (Figure 1). These droplets are known to have a very high concentration of sulphuric acid.

The ‘life-on-Venus’ claim sparked a series of email conversations between us. JEH, who had seen the news reports, works on microbiology under water-activity-induced constraints (amongst other things). Water activity is the effective concentration of water; a key parameter that determines the functionality of cellular systems. Independently of each other, several collaborators wrote to JEH to discuss implications of the phosphine finding in relation to water activity. PB commented: “The focus in [the media’s] reporting is so much on the acidity of the droplets, but of course a potentially bigger issue…is the low water activity” and María-Paz Zorzano wrote: “The scientific community is thinking it challenging to live in the clouds because of the pH, but…ignoring that we are defining most of Mars, the Moon, asteroids, and…exoplanets as non-habitable because of water activity.” As a consequence of these exchanges, JEH agreed to lead an article on this topic.

The initial idea was a Matters Arising article for Nature Astronomy in response to the original ‘biogenic phosphine’ paper. JEH assembled a team including, critically, Christopher P. McKay and Thomas Koop who have expertise in calculating the water activity of ice and aqueous solutions; and other important (apparently disparate) kinds of expertise:

Most of us were unfamiliar with the clouds of Venus, but decided to explore the conditions there regardless. Once the writing was underway, it was clear that substantial calculations were needed to quantify the water activity of the sulphuric acid droplets of the Venus clouds (based, for the first time, on data from observations rather than the use of assumption-based models), and a meta-analysis/reassessment of data relating to the limits of life on Earth. Therefore, the Matters Arising paper morphed into a Research Article (Hallsworth et al., 2021b).

Life detection in/on extraterrestrial bodies has famously been based on the mantra “follow the water”. The surface of Venus is far too hot for liquid water or for terrestrial-type life to occur there – but the cloud layer is in the right temperature range for active cellular life based on what we know of life on Earth. Clouds are not generally a primary target for astrobiological searches: large bodies of liquid water on or below a planetary surface have been regarded as a better hunting ground. However, active life can exist in clouds, as demonstrated by the diverse and active microbial communities that inhabit the clouds of Earth.

We considered the microbial cell’s requirement for water as a biophilic solvent; the need for water within a cell’s plasma membrane; and the impact of sulphuric acid on the structural and functional stability of cellular macromolecules. According to empirical data derived from experimental systems, we also considered whether any known microbes could tolerate the acidity of the Venus clouds. We found that the ‘record’ for microbial tolerance of acidic conditions (see below) was equivalent to about 11 weight % sulphuric acid, and that the Venus clouds contain from seven to nine times this amount (Hallsworth et al., 2021b).

What is more, microorganisms able to tolerate multiple extremes such as Acidohalobacter aeolianus (which grows at reasonably high levels of sulphuric acid and is reasonably tolerant to low water-activity) are less tolerant to acidity, i.e. they tolerate considerably less than 11%.  This bacterium and other model microbes were used to understand the apparent biophysical limits for the functionality of terrestrial microbes (this said, we were not proposing that these same microbes could necessarily subsist under the overall conditions found in the Venus clouds). To our surprise, we also uncovered evidence that the acidity limit of the most acid-tolerant microbe (Picrophilus torridus; Figure 3) is actually determined by the reduction in water activity caused by the acid, rather than its acidity per se. This finding reinforces the importance of water activity as a determinant for the biological permissiveness of potential habitats.

Whilst contemplating the possibility of life in the atmosphere of Venus, we often found ourselves imagining that we were a cell within those sulphuric acid clouds. JEH asked lipid- and plasma-membrane expert Marcus K. Dymond to make a sketch showing the thermodynamic distance between the limits of active terrestrial life and the conditions of Venus’s clouds, indicating also mechanistic constraints on cellular systems that result from low water activity and high sulphuric acid concentration. After further elaboration, this diagram became Figure 3 of the paper. It shows, somewhat dramatically, how far the conditions of Venus’s clouds are from those required for life on Earth. The mean relative humidity for much of the Earth's Sahara Desert is about 25 to 30%; on this basis, Venus's clouds are around 60 times (or more) dryer than the Sahara (Mateus et al., 2021).

Against the backdrop of climate change on Earth, NASA will launch two missions to Venus from 2028 to 2030 and the European Space Agency will launch a mission in 2031 (O'Callaghan, 2021). One of these, NASA's ‘Deep Atmosphere Venus Investigation of Noble gases, Chemistry, and Imaging’ (DAVINCI+), will focus on further characterisations of the Venus atmosphere. This mission was designed prior to the 2020 phosphine study, so was not motivated by astrobiology. However, given that the temperature range of Venus’s clouds is consistent with (terrestrial) biology, the data that will be collected by DAVINCI+ will no doubt be analysed by astrobiologists. The relatively cool atmosphere of Venus alludes to the possibility that the microbial life of a super-heated Earth might ultimately find sanctuary in its clouds.

We also carried out analyses of planets other than Venus, and unexpectedly found that a layer in Jupiter’s clouds (Figure 4), at about the 5-atmosphere pressure level, has a temperature : water activity combination that is permissive for life. Other things are required for cellular metabolism, including energy sources for example, so this finding does not by any means imply that there is life on Jupiter (or even that there could be). Nevertheless, the finding might stimulate future studies on other aspects of Jupiter’s clouds.

The analysis of Earth’s atmosphere showed that, as expected, the upper stratosphere and mesosphere are too dry for the metabolic activity of microbial cells. The same approach as we used in our Nature Astronomy study could also be applied to planets orbiting other stars (exoplanets) as new telescopes are developed that can provide details of the temperature, pressure, and water abundance in their atmospheres.

More broadly, our results suggest that, if we are thinking about terrestrial-type biochemistry when searching for life beyond Earth, it is not enough to simply find places that have some liquid water. As Samuel Taylor Coleridge wrote, water can be abundant and at the same time biologically unusable: “Water, water, every where, Nor any drop to drink”. To evaluate habitability, therefore, we have to consider the water activity. When we do this, some environments that look potentially habitable no longer appear so – while we might also find potential habitats in genuinely surprising places, such as the atmosphere of Jupiter.

Details of poster image: illustration of stormy clouds on Jupiter, based on images from the Stellar Reference Unit camera of the Juno mission (NASA); credits: NASA/JPL-Caltech/SwRI/MSSS/Gerald Eichstädt/Heidi N. Becker/Koji Kuramura.