Neutrinos, the lightest and most weakly interacting of known subatomic particles, can reverse the collapse of massive stars and produce supernova explosions. We see the effects of neutrinos at the moment of stellar death in the pattern of newly created elements in the supernova remnant Cassiopeia A.
Toshiki Sato and John P. Hughes
2 contributors
Like Liked by Paul Woods and 1 other

The abundances of stable Ti and Cr relative to Fe observed in the Cassiopeia A core-collapse supernova remnant reveal that Ti and Cr must have formed in neutrino-driven plumes that helped to drive the explosion.

Astronomical research often centers around finding answers to simple, but fundamental, questions. Stars are key to many aspects of modern astronomy and yet we are still researching answers to such basic questions as "How are stars born and how do they die?" We do know that stars are born in the gravitational collapse of vast clouds of dust and gas; this collapse stabilizes after hydrogen begins fusing in their cores.  In time the nuclear fuel (initially hydrogen but later cycles use heavier elements including helium, oxygen, and silicon) runs out and stars begin their death throes. Stars up to a few times the mass of the sun end their lives as white dwarfs, the dense compact cores of the original star that are gravitationally stable.  More massive stars end their lives in spectacular events known as "supernovas". These are luminous outbursts, powered both by heat generated in the explosion and radioactivity of newly created elements, and are visible to great distances.  Such supernovas produce two new astronomical objects: the central parts of the star compressed into a neutron star (the densest form of matter known) or a black hole, and the outer parts of the star, containing several solar masses of newly created elements, expanding away from the explosion site at thousands of kilometers per second.  How these events produce both dense compact objects at their centers as well as the rapidly expanding stellar material, called a supernova remnant, is a long-standing problem in astrophysics.  Many astronomers are researching this question using the latest observations and by creating simulated explosions on supercomputers. Our research [1] (https://www.nature.com/articles/s41586-021-03391-9), based on X-ray observations of the supernova remnant Cassiopeia A, have gotten us to the heart of this problem.

On February 23, 1987, neutrinos were detected from supernova SN 1987A [2, 3] (See Fig. 1), which was identified with the explosion of a massive star in the Large Magellanic Cloud, a neighboring galaxy.  This direct neutrino observation provided key evidence for the role of neutrinos, the lightest and least interacting of all stable particles, in the explosion mechanism of supernovas. This research was awarded the Nobel Prize in Physics in 2002, and since then, our understanding of the explosion mechanism of massive stars has advanced steadily.

The basic picture of the core-collapse supernova explosion process is the following. In the interiors of stars more massive than 8 times the mass of the Sun (1 solar mass = 2 × 1033 g), an iron core forms during the final stage of stellar evolution. Iron atoms are unable to produce energy by fusion so once the iron core grows to about the mass of the sun the core becomes unstable and is unable to provide sufficient support against the inward force of gravity, leading to gravitational collapse. The collapsing core gets crushed into an extremely dense object, a proto-neutron star, which slows the collapse and drives shock waves into the infalling matter above.  If this bounced shock wave reaches the surface of the star, the star will explode.  The problem is that the rebound is not strong enough and in nearly all numerical computations some other process is needed to produce a sufficiently energetic explosion.  A leading contender for providing the necessary extra energy to the rebounding shock is the neutrinos that the forming neutron star produces [4]. Neutrinos themselves are very light (< 2 × 10−34 g) and do not interact much with matter, but they are emitted in vast numbers from the core and the rebounding stellar matter is incredibly dense (millions of times the density of water).  If even as little as 1% of the total energy of the supernova neutrinos were to be delivered to the surrounding material through neutrino heating, the shock wave would be revived with sufficient energy to overcome the star's collapse. Currently, this is the leading contender for the supernova explosion mechanism.

Until now, it has been very difficult to verify this neutrino heating process, both theoretically and observationally. In theoretical approaches, neutrino heating requires tracking the interactions of large numbers of neutrinos with the dense stellar matter, a computationally difficult challenge.  In recent years, improved supercomputer technology has allowed for some theoretical groups to run large two- and three-dimensional simulations of massive star supernovas that have succeeded in producing successful explosions.  A key result of these studies is that the neutrino heating mechanism is inherently complex and strongly asymmetric. In particular, the simulations predict that neutrino heating drives convection (the process by which heated gas or liquid rises in a gravitational field while cooler material falls) and makes high-entropy (low density and high temperature) bubbles (Figure 2) whose temperature exceeds 1010 K. Some of the biggest high-entropy bubbles can develop into Rayleigh−Taylor instabilities on a larger scale at late stages of the explosion. A key point for our research is that, at the temperatures and densities of these high-entropy bubbles, the existing nuclei are broken apart and reassembled into mostly iron nuclei plus a few other trace species.  In our study, we found such high-entropy structures in the galactic supernova remnant Cassiopeia A by carefully measuring its composition, thereby finding  strong observational evidence of the neutrino heating mechanism.

Cassiopeia A is one of the most famous and well-studied supernova remnants in our galaxy, the Milky Way. It is located approximately 11,000 light years from Earth and covers a diameter of about 10 light years on the sky (Figure 3).  The Chandra X-ray observatory has been observing this object regularly for 20 years.  X-ray emission provides information about the elements synthesized and ejected by the supernova explosion. Studies based on some of the earlier Chandra observations had identified the southeastern edge of the remnant (the bottom-left quadrant in Figure 3) as the location of iron-rich ejecta produced deep within the exploding star and flung out beyond the rest of the material by some process like neutrino-driven convection.  This finding was not conclusive and required confirmation. In our study, using all the Chandra data observed during the period 2000-2018, we have discovered trace amounts of the elements titanium and chromium along with large quantities of iron from the protruding plumes at the remnant's southeastern edge. The measured quantities of titanium and chromium relative to iron agree with an origin in the deepest regions of an exploding massive star.  Furthermore using theoretical models we have shown that the material was synthesized under the high-entropy conditions expected in the neutrino-heated bubbles.  In conclusion our finding may be the most significant result on the role of neutrinos in exploding massive stars since the detection of neutrinos from Supernova 1987A.

We may be on the verge of solving the long-standing problem of how core collapse supernova explode. Further progress will be made with next-generation supercomputer simulations and upcoming X-ray missions like XRISM, Athena and Lynx that will provide greater sensitivity for measuring and discovering additional rare elements in supernova remnants. 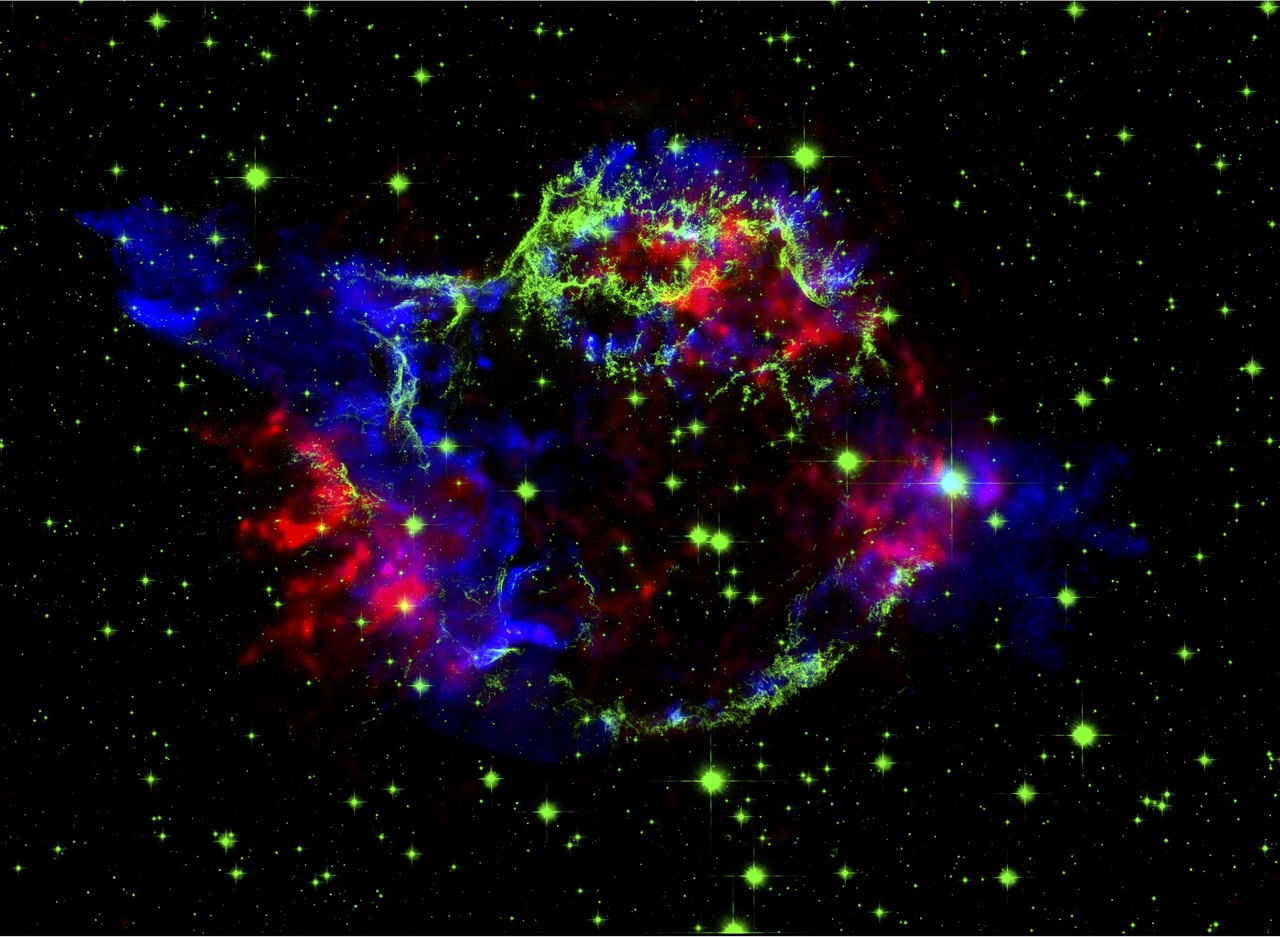 Neutrinos, the lightest and most weakly interacting of known subatomic particles, can reverse the collapse of massive stars and produce supernova explosions. We see the effects of neutrinos at the moment of stellar death in the pattern of newly created elements in the supernova remnant Cassiopeia A.