A pathway to peptide synthesis under interstellar conditions presented in this article demonstrates that the chemistry that takes place in space is much more complex than we previously thought. This discovery could shed light on the origin of life on Earth and exoplanets.
Serge Krasnokutski
Researcher, Friedrich Schiller University Jena
Follow
Like Liked by Evelina Satkevic
0

Using common interstellar chemical species (CO, C and NH3), the authors show that peptides can be experimentally synthesized on a solid surface under interstellar conditions. The formation route circumvents the creation of amino acids in the pathway towards proteins.

From time immemorial, the origin of life was a mystery that excited the minds of people. Attempts to solve this riddle have spawned many myths and religions. Just starting from the 20th century, the majority of people have begun to understand the origin of life as an evolutionary process of increasing complexity that started from the simplest species. However, how far this evolutionary process could proceed in space remained unknown. The role of space delivery of organic material in the origin of life, although admitted, was limited to the delivery of the simplest components of biomolecules. This is not surprising, because usually, the speed of chemical processes slows down at low temperatures. Therefore, the ultra-low temperatures, which are common in astrophysical environments, were assumed to completely freeze out any chemistry in the dense areas of the interstellar medium (ISM). Even the discovery of a high abundance of small organic molecules in molecular clouds has caused great surprise. At the moment, the formation of amino acids, nucleobases, lipids, and sugars in space has been confirmed. However, the next step towards the origin of life, namely, the formation of biopolymers is still not completely understood and was expected to take place only on planets in aqueous solutions.

In the published article, the chemical pathway that makes this next step possible has been demonstrated. The formation of peptides was found in the experiment under conditions similar to those in outer space. The chemistry proceeds via a completely new path, which has never been considered before. It skips the stage of amino acid formation in protein synthesis and includes the most abundant species (CO, C, and NH3) found in star-forming molecular clouds. Thus, it can cause a noticeable abundance of peptides or even proteins in the ISM long before the formation of the planets. The delivery of these biopolymers to planets could have a significant impact on the origin of life on Earth and exoplanets. This discovery shows that the chemical processes occurring in space can be much more complex than previously thought.

For a long time, it has been assumed that organic molecules in outer space could be efficiently formed through the condensation of C atoms on the surface of dust particles. However, there was almost no experimental confirmation of this. To make such experiments possible, I developed a source capable of generating a pure flux of C atoms.1 Already first experiments confirmed this assumption, demonstrating an important role of atomic carbon in the formation of organics in the ISM.2 The next important step in the research was the development of an experimental method that allowed to study surface reactions at the fundamental quantum level.3 The established method was applied to study the formation of glycine under space conditions.4 Although the glycine formation was found to be possible, all chemical pathways had energy barriers that reduced the probability of these reactions. Among all studied pathways, the largest energy barrier was associated with the attachment of water molecules. At the same time, the polymerization of amino acids has a sufficiently large energy barrier mainly associated with the opposite process, namely with the breaking of chemical bonds that are required to detach water molecules. I wondered if these two stages, both with high energy barriers, are necessary for the formation of peptides. Aminoketene molecule (NH2CHCO), which is an isomer of the polyglycine monomer, should polymerize much more easily compared to the polymerization of glycine or any other amino acid, and it should be formed without a barrier in the reaction CO + C + NH3.5 However, aminoketene has never been observed in experiments. Therefore, I decided to test experimentally the possibility of the formation of aminoketene molecules under space conditions. Surprisingly, besides the expected formation of aminoketene at T = 10 K, its efficient polymerization during the evaporation of ammonia from the substrate was observed. In this way, peptides were spontaneously synthesized at low temperatures without energetic processing.

In the article, we were trying to avoid the speculations on the potential importance of the molecules formed in our experiments for the origin of life. Here I would like to add a few more comments on the topic. Although the formation of relatively short peptides (less than 10-11 monomeric units) was found in the experiments, their formation was completely spontaneous. The polymerization of amino acids under energetic processing (e.g. heat, pressure, or UV irradiation) is well known. Therefore, a further increase in chain length can be expected in natural environments. Moreover, by adding other species instead of a proton to the α-carbon atom of aminoketene during the polymerization, a variety of different peptide chains can be formed. Furthermore, chemical and photochemical modifications of glycine residues in peptides into other amino acid residues were also demonstrated in many works. Thus, the glycine peptides observed in our experiments can be converted into different proteins. Since most biological reactions are catalyzed by proteins and peptides, their formation can trigger the formation of other molecules. One might even speculate that such simple chemistry could lead to the formation of autocatalytic sets of molecules, which would launch natural selection.

In this way, this work opens up many interesting avenues for further studies of the origin of life on Earth and the chemistry of the ISM.

I received my PhD at the Institute for Low Temperature Physic and Engineering, National Academy of Sciences of Ukraine, and the MPI for Flow Research, Göttingen (Germany) in 2004, studying the structure of biomolecules. I carried out my postdoctoral research at the University of Kentucky, Lexington (USA). Since 2008, I am a member of the Laboratory astrophysics group of the MPI for Astronomy at the University of Jena. My main research interest are in low‐temperature molecular physics and chemistry with a particular interest in structure, dynamics, and formation pathways of biologically and astrophysically important molecules as well as their complexes and clusters. 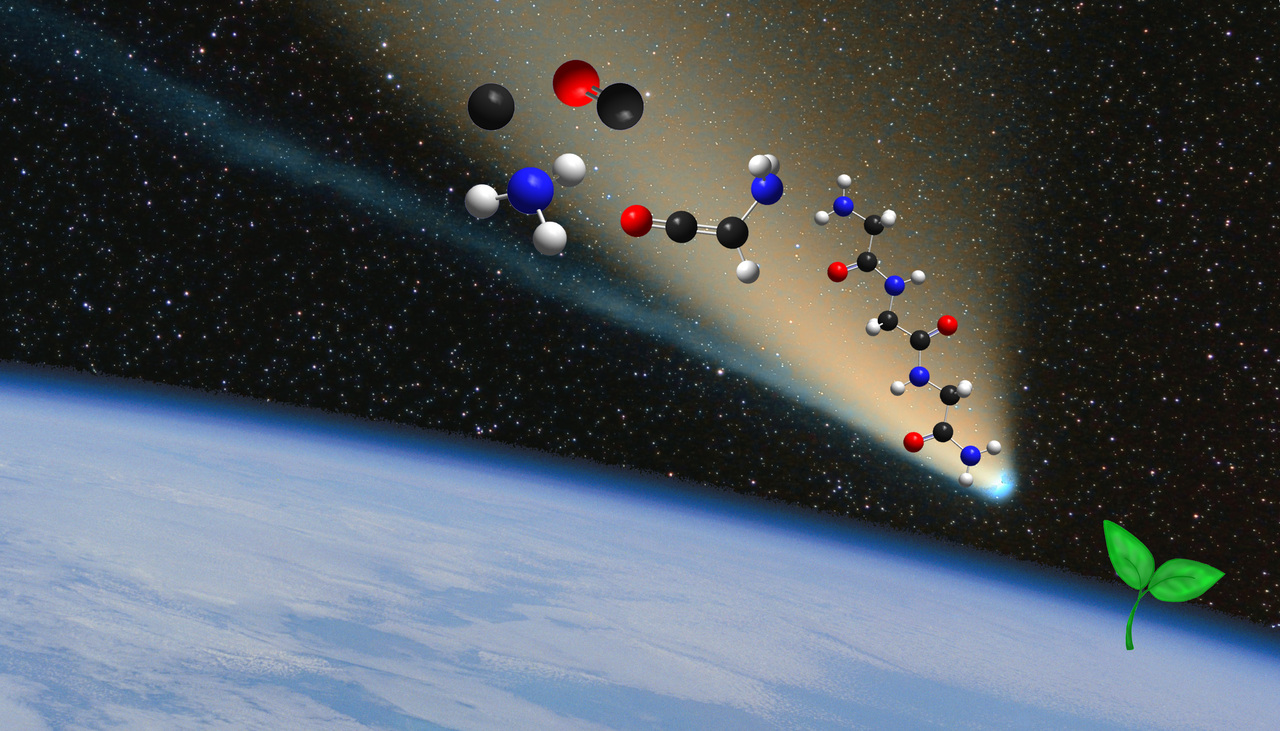 A pathway to peptide synthesis under interstellar conditions presented in this article demonstrates that the chemistry that takes place in space is much more complex than we previously thought. This discovery could shed light on the origin of life on Earth and exoplanets.