Quasi-periodic eruptions are high-amplitude X-ray bursts recurring every few hours from near the supermassive black holes in galactic nuclei. We have discovered two new sources (doubling the sample!) and discuss the possible origin of this new exotic manifestation of black hole accretion.

In September 2019 I participated at the decadal X-ray Astronomy conference in the lovely Bologna, where the first discovery of quasi-periodic eruptions (QPEs) was reported by Giovanni Miniutti and collaborators. He presented how the nucleus of the galaxy GSN 069, which was already quite interesting before - albeit in a more “normal” way - started flaring in X-rays every few hours. I was awestruck, but being effectively a baby researcher I wasn’t sure whether my awe was justified, until I saw senior people stopping answering emails and paying full attention to the speaker. That’s the universal sign that something big is going on in the room. In the same conference, a poster showing a second QPE source found in the XMM-Newton archives was presented by Margherita Giustini and collaborators. The science case of QPEs was officially born. I’d like to think that in the conference picture (see below) I was already focused on how to exploit the newly-launched eROSITA to find new QPEs. Truth is, I was probably thinking about how to reach the buffet before the other 300 participants, which would explain why I was standing in the back and closer to the entrance.

Shortly after coming back to Munich from Bologna, I presented my confused ideas on how to use eROSITA to find more QPEs to my supervisors Andrea Merloni and Paul Nandra. They helped me a lot in shaping the mess I had in my head into a very precise observational strategy. The XMM-Newton proposal deadline was imminent and a follow-up proposal of eROSITA QPE candidates was soon drafted, thanks of course to the help of many other colleagues as well. On 13 December 2019, eROSITA started the first of eight all-sky surveys (eRASS1-8), each to be completed in six months, observing in the 0.2-8 keV band. In each survey, as the field of view moves, every point of the sky is observed for ~40 seconds every ~4 hours with the number of times (typically around six) varying with the location in the sky, increasing towards high ecliptic latitudes. It is therefore ideal to pick up objects varying on the timescale of hours, although of course the survey sampling prevents us from reaching a complete census of QPEs, or an immediate verification of the QPE behavior. Our simulations predicted a number of promising eROSITA QPE candidates around unity per year. In all honesty, I was peacefully ready for that number turning out to be a solid zero, given the many uncertainties involved in such predictions and being myself the person who made them. But in the end predictions turned out to be broadly accurate (spoiler: we found 2 in a year!).

With a few hiccups in between (did somebody say pandemic?), flash forward to mid-July 2020, when my QPE-searcher machinery was systematically up and running for good. One promising candidate was found in eRASS1 data (which ended in June 2020) and the accepted XMM-Newton follow-up observations were triggered. Before knowing anything about the first candidate, a second one was found in eRASS2, and XMM-Newton Director Discretionary Time was kindly granted by the XMM-Newton PS Norbert Schartel. Amazing datasets started to flow in, which confirmed the QPE nature of both sources (see image below). For one of the two, however, the putative quasi-period and burst duration was so long that two 90-ks XMM-Newton observations could not constrain it. Therefore we requested and obtained an incredible high-cadenced X-ray monitoring with NICER - which lasted more than eleven days! - the preview of which was continuously and kindly shared by the NICER PI Keith Gendreau with great (and shared) excitement.

Within a month or so, most of the X-ray analysis was performed and optical spectra of the two host galaxies, which were spectroscopically-unknown before, were taken. They revealed what is perhaps the most interesting finding of our work published in Nature: the host galaxies of these QPE sources were a passive and a star-forming galaxy, respectively, with no indication of past AGN-like activity. However, this was not the case for the two previously known QPE sources which, despite the many other similarities with the newly-discovered ones, originated from active nuclei. The importance of this was immediately clear, but to give proper credit where it is due, I was first convinced of this by two collaborators in particular, Gabriele Ponti and Erin Kara. The inactive nature of these host galaxies might in fact suggest that no pre-existing AGN-like accretion flow is needed to trigger QPEs, but only a supermassive black hole. Indeed another important contribution of our work is that data are overall in tension with predictions from current disk instability models. An alternative scenario, which was already suggested for GSN 069, is the presence of a much smaller compact object orbiting around the central low-mass supermassive black hole (most likely around 105-107 solar masses). The strength of this interpretation is that it is testable in the immediate future by studying the possible orbital evolution of the system over months timescales. We have in fact ongoing programs with NICER and the Neil Gehrels Swift Observatory to carry this out. Moreover, the intriguing long-term consequence of this orbiting-body scenario is the synergy with future generations of gravitational waves detectors. Such binary systems with extreme mass-ratios are indeed expected to be detected by LISA and could open a new chapter of the multi-messengers era.

Personally, I am very excited about this discovery and it will probably take some time for me to realise that I am actually publishing in Nature as first author. Looking a few years back, if somebody told me I would have never believed this. Looking a bit less back in time, last summer I promised a few friends that I would buy them dinner if this work was ever published in Nature (they even claim I promised a fancy place but evidence is controversial). Well, it will be among the many things that I will gladly do once we can all go back safely to our normal lives! 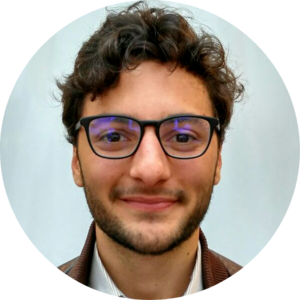