LHAASO has found a dozen ultra-high-energy (UHE) cosmic accelerators within the Milky Way. It has also detected photons with energies exceeding 1 PeV, including one at 1.4 PeV. These findings overturn our traditional understanding of the Milky Way and open up an era of UHE gamma astronomy.

Discovered by Victor Hess in 1912, cosmic rays, relativistic particles that shower Earth, contribute a significant part of the energy density in the universe and carries unambiguous informations on various astrophysical processes . Yet until now, origin of cosmic rays is still a mystery.

A key problem in understanding the origin of cosmic rays is the searching for the acceleration site up to or even beyond Ultra-high energy (UHE). Such extreme accelerators are dubbed as PeVatrons.  However, composed of subatomic particles, such as protons or atomic nuclei, cosmic rays are charged and lose the direction information in propagating in the magnetic field in the interstellar medium, which make it impossible to identify the PeVatrons from direct cosmic ray measurement. On the other hand, UHE γ-rays, those fall in peta-electronvolt (1015 eV) range, are produced unavoidably inside or in the vicinity of PeVatrons.  γ-rays are not charged and travel straight , thus they can be regarded as the straightforward signature to identify PeVatrons.The first pieces of evidence on the detection of PeVatrons have been reported by the HESS, AS-gamma and HAWC collaborations. These appealing results indicated that for systematic and unbiased exploration of PeVatrons, the gamma-ray studies should be extended well beyond 100~TeV. With the construction of the Large High Altitude Air Shower Observatory (LHAASO),
the achievement of this ambitious goal has become feasible.

China's Large High Altitude Air Shower Observatory (LHAASO)—one of the country's key national science and technology infrastructure facilities—has found a dozen ultra-high-energy (UHE) cosmic accelerators within the Milky Way. It has also detected photons with energies exceeding 1 peta-electron-volt (quadrillion electron-volts or PeV), including one at 1.4 PeV. The latter is the highest energy photon ever observed. These findings overturn our traditional understanding of the Milky Way and open up an era of UHE gamma astronomy. These observations will prompt us to rethink the mechanism by which high-energy particles are generated and propagated in the Milky Way. In addition, these observations will encourage us to explore more deeply violent celestial phenomena and their physical processes as well as test basic physical laws under extreme conditions. These discoveries are published in the journal Nature on May 17 (https://www.nature.com/articles/s41586-021-03498-z ). 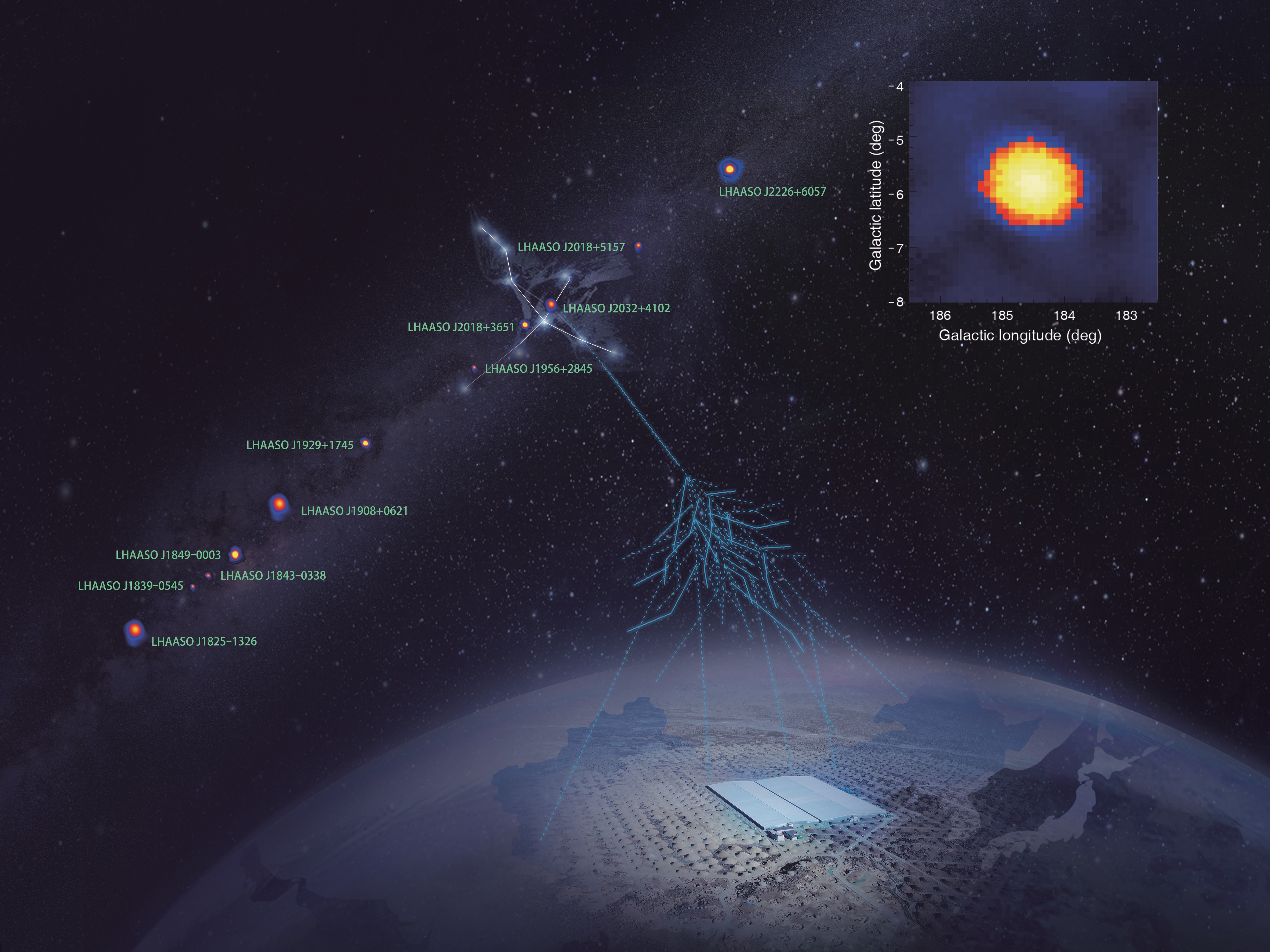 Figure 1. The positions of the sources in the milky way and the schematic view of the LHAASO detectors.

Despite having several potential counterparts in their proximity, including
pulsar wind nebulae (PWNe), supernova remnants (SNRs) and star-forming regions, the
PeVatrons responsible for UHE gamma-rays are not yet firmly localized
and identified, leaving open the origin of these extreme accelerators.  Regardless of the nature of objects associated with the UHE sources, the photons detected by LHAASO far beyond 100 TeV prove the existence  of Galactic PeVatrons.  Moreover, it is likely that the Milky Way is full of these perfectly designed particle accelerators!
The acceleration of protons to PeV energies requires extreme physical conditions, representing a challenge for any galactic source population, including  SNRs and star forming regions as  suspected major contributors to Galactic CRs. PWNe, as potential (and in fact, the only feasible) electron PeVatrons in our Galaxy, demand even more extreme theoretical speculations.

The reported in this paper 12 UHE sources reveal only  the tip of the iceberg. The observations with LHAASO in the coming several years  will reduce the flux detection threshold by at least an order of magnitude. This will dramatically increase the number of UHE sources, and, at the same time, provide high quality energy spectra and
morphology  of UHE sources. The extension of the spectra without an indication of a cutoff beyond  several PeV would not only robustly identify the hadronic origin of the UHE gamma-radiation, but, more importantly, would reveal the sites of  super-PeVatrons, the CR factories in the Milky Way responsible  for the locally observed flux of cosmic rays well above the "``knee".

And at last I want to review briefly on the history of Cosmic Ray Research in China.  Cosmic ray research in China has experienced three stages. LHAASO represents the third generation of high-altitude cosmic ray observatories. High-altitude experiments are a means of making full use of the atmosphere as a detector medium. In this way, scientists can observe cosmic rays on the ground, where the size of the detector can be much larger than in a space-borne detector outside the atmosphere. This is the only way to observe cosmic rays at very high energy. In 1954, China's first cosmic ray laboratory was built on Mt. Luoxue in Dongchuan, Yunnan Province, at 3,180 meters above sea level. In 1989, the Sino-Japanese cosmic ray experiment ASg was built at an altitude of 4,300 meters above sea level at Yangbajing, Tibet Autonomous Region. In 2006, the joint Sino-Italian ARGO-YBJ experiment was built at the same site. In 2009, at the Xiangshan Science Forum in Beijing, Professor CAO Zhen proposed to build a large-scale composite detection array (i.e., LHAASO) in a high-altitude area. The LHAASO project was approved in 2015 and construction began in 2017. By April 2019, construction was 25% complete and scientific operation had begun. By January 2020, an additional 25% had been completed and put into operation. In December of the same year, 75% of the facility had been completed. The entire facility will be completed in 2021. LHAASO has already become one of the world's leading UHE gamma detection facilities, and will operate for a long time. With it, scientists will be able to study the origin of cosmic rays from many aspects.

Prof, University of Science and Technology of China