With a unique experimental approach, utilising a Time Projection Chamber radiation detector and the HIγS gamma-beam facility, the nuclear reaction cross section for the fusion of carbon-12 and an alpha particle was determined, which may reveal new information regarding how stars live and die.

A supernova is a powerful and bright stellar explosion, with a luminosity that can reach levels comparable to that of an entire galaxy, before fading away over several weeks. These events occur during the core collapse of a massive star (Type II) or when a carbon-oxygen white dwarf is triggered into runaway nuclear fusion, through accreting matter from a nearby companion red giant star (Type Ia).

These events have been exceptionally useful in determining the structure of our universe. The Phillips relationship links the peak luminosity of a Type Ia supernova and the rate of luminosity rise and decay before and after the maximum brightness. By utilising this simple relationship, the light curves of Type Ia supernovae have been used as “standard candles” to measure cosmological distances and have contributed to the discovery of the accelerated expansion of the universe and dark energy. 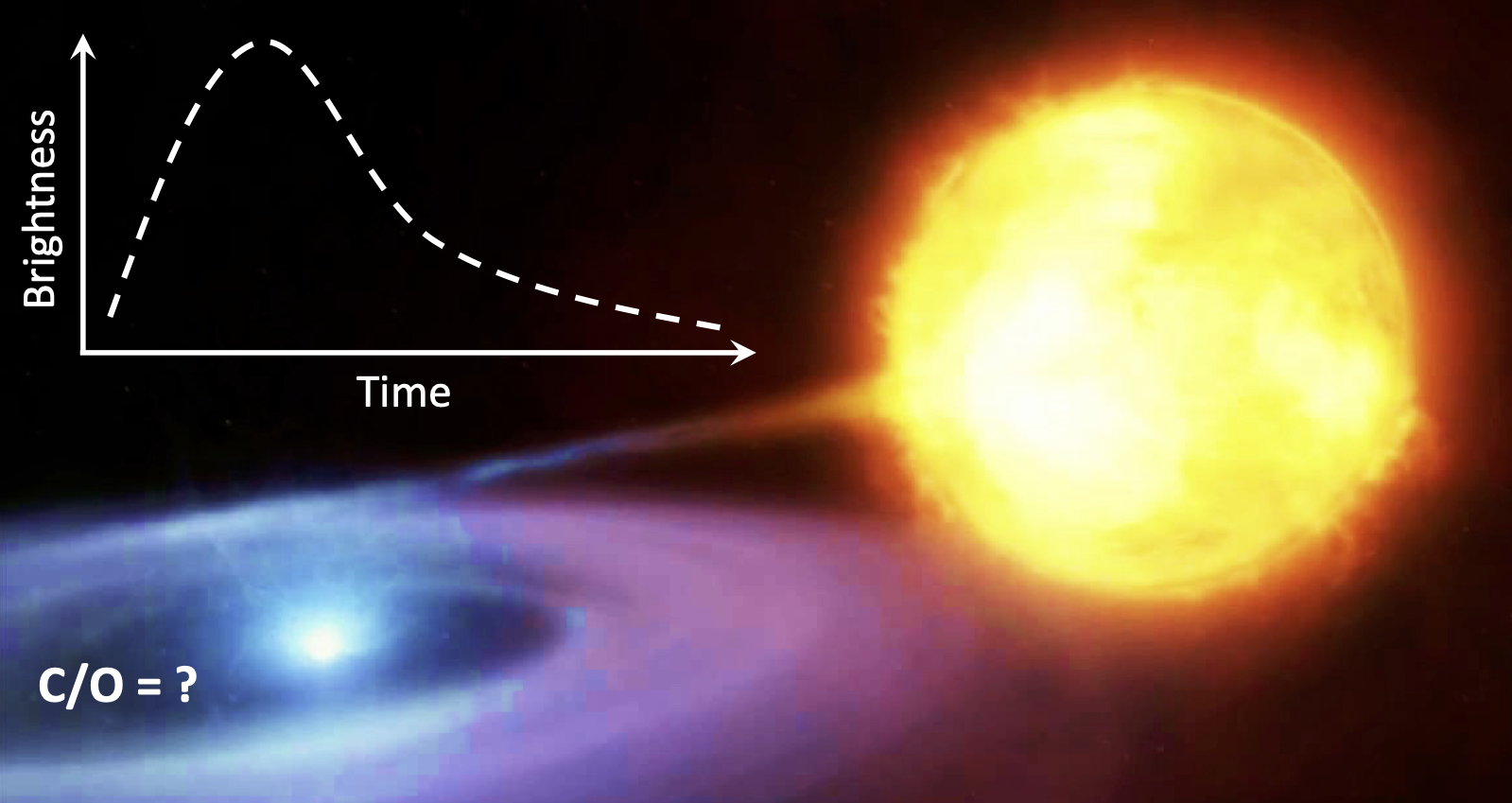 Accretion of matter onto a carbon-oxygen White Dwarf from a companion star along with an indicative plot of a Type Ia supernova light-curve as a function of time.

To properly understand these explosions, one must look to the quantum world and the nuclear reactions that fuel stars throughout their lives. We consider here a nuclear structure effect that determines the evolution of a Type Ia and Type II supernovae: the carbon/oxygen (C/O) ratio at the end of helium burning. During this second stage of a star’s life, after hydrogen burning, the elements carbon and oxygen are formed. Carbon is synthesised through the “triple-α process” via the Hoyle state resonance in 12C, but at the same time, carbon is also destroyed by fusing with another alpha-particle to form 16O: denoted as the 12C(α,γ)16O reaction. Hence, the formation of oxygen in stellar helium burning determines the C/O ratio. This ratio is important for the evolution of massive stars (M > 8 M⊙) to Type II core collapse supernova. Critically, the C/O ratio at the end of stellar helium burning determines whether the Type II supernova leaves behind a neutron star (for C/O > 1) or a black hole (for C/O < 1). More recently it was shown that the C/O ratio is also crucial for determining the 56Ni mass fraction that affects the light curve produced by lower mass stars (M ~ 1.4 M⊙), which may evolve into Type Ia supernova. Thus, the C/O ratio is also important for understanding the light curves of Type Ia supernovae as standard candles and their resulting impact on our knowledge of the evolution of the universe.

Stellar evolution theory relies on accurately understanding the rates of nuclear reactions within stars, which originates from measuring these nuclear reactions in terrestrial laboratories. Knowledge of the rate of formation of oxygen in the 12C(α,γ)16O reaction requires accurate measurements of the reaction at intermediate energies (where the reaction rate is high) and then extrapolating the measured cross section to the most efficient burning energy (Gamow window) at 300 keV.

Up until now, all measurements of 12C(α,γ)16O imitated the stellar fusion of carbon with an alpha-particle to form oxygen. Typical experiments will accelerate a beam of alpha particles, collide them with a carbon target, and measure the emitted gamma-radiation from the reaction. However, this technique is plagued with issues including intractable beam-induced backgrounds and difficult efficiency corrections for the gamma detector arrays. In our unique approach, we instead measured the time reversed process – the breakup of oxygen into carbon and an alpha-particle after the absorption of gamma radiation – inside an active target Time Projection Chamber (AT-TPC) detector. Quantum mechanics allows us to deduce the direct process from the time reversed one using the principle of detailed balance.

The AT-TPC detector is filled with a CO2 + N2 gas mixture, which forms the target medium. Quasi mono-energetic gamma beams from the HIγS facility at Duke University were collimated and directed onto the gas. The carbon and alpha nuclei that emanate from the resulting nuclear reaction travel a few centimetres in the TPC, ionising the gas molecules along their paths. The ionisation electrons drift in an electric field and are collected by an anode grid. Avalanche grids multiply the electrons, leading to the emission of near-UV light. This permits us to photograph the track of the particles and accurately deduce their scattering angles with an unprecedented 2° resolution. 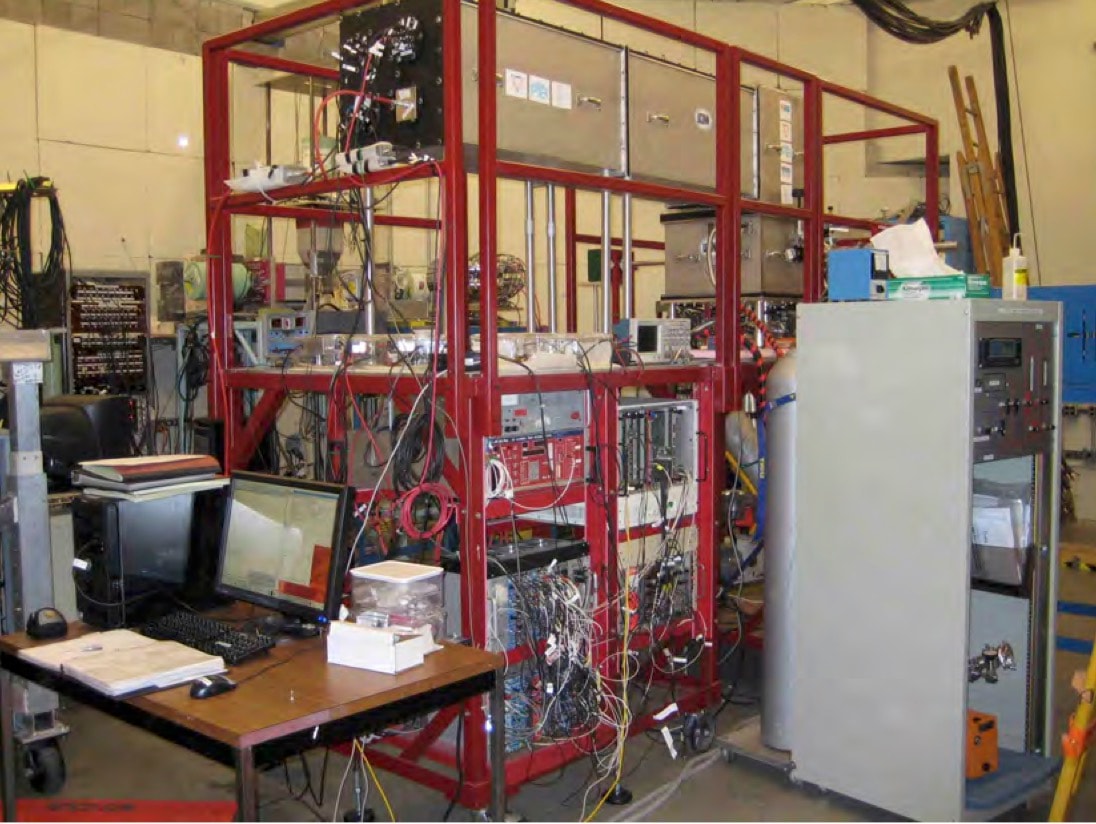 For the first time in the energy region of interest, the angular distributions that we measured are consistent with a basic prediction of quantum mechanics, which has hitherto been overlooked. Our results indicate that previous data, used in extrapolations to stellar conditions, may have poorly understood systematic errors.

The UConn-HIγS Optical TPC was built between 2006 – 2011 at the University of Connecticut by a team led by Prof. Moshe Gai. The measurements occurred in 2012 and, following several publications on the photo-dissociation of carbon-12, the data on the photo-dissociation of oxygen-16 remained part-analysed on disk. My own involvement in this research began in 2017 after I graduated from my PhD in nuclear physics at the University of Birmingham and obtained my first academic post, as a lecturer in the Department of Engineering and Mathematics at Sheffield Hallam University, where I primarily teach on the BSc Physics degree programme. As an early career researcher, wishing to establish my own research group, Prof. Gai kindly invited me to collaborate on this research and to co-supervise two PhD students (S. R. Stern and D. K Schweitzer) at UConn who assisted me in the data analysis. Analysing TPC data was a steep learning curve, as they are very different to the data I worked with during my PhD, where my experiments primarily utilised silicon charged particle detectors. As a collaboration, this experience puts us in good stead as we look to the future where we will utilise a new electronic TPC detector (built by the University of Warsaw) firstly at HIγS, and later at the ELI-NP gamma-beam facility, which is under construction in Romania. 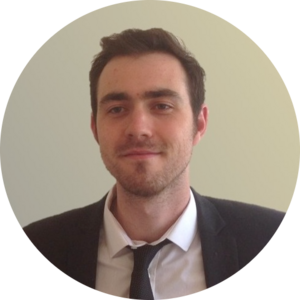