Exploring the atmospheric conditions associated with Jupiter’s colorful banded appearance has been a scientific challenge.  Chief among the properties to be determined is temperature, which is intimately tied to atmospheric dynamics, cloud formation, and chemistry. The Pioneer 10 and 11 spacecraft in the early 1970s revealed temperatures varying generally from warmer air over visibly darker bands to cooler air over lighter bands. But the visible banding was known to change over time, so the relationship between variability of temperatures and other properties of the atmosphere remained unknown.

Questions about time variability were pursued with observations of Jupiter’s thermal emission from ground-based telescopes. The relevant technology changed substantially over time, starting with temperature maps made using repeated north-south scans over the center of Jupiter’s disk as it rotated. Subsequent advances enabled 2-dimensional raster-scanned maps, followed by 2-dimensional cameras. This ground-based record established a link between the 1979 Voyager and 2001 Cassini observations, two decades apart. They also provided temperature maps to supplement the limited regions covered by the Galileo mission in 1995-2003 and the reconnaissance of Jupiter’s deeper atmosphere by Juno since 2016. Our challenge was to compare these thermal observations from vastly different instruments.

Our new study greatly extends this work, succeeding in providing the first measurement of temperatures in Jupiter’s upper troposphere covering over 40 years of scanning, mapping and imaging - over three Jovian orbits, making possible distinctions between seasonal and non-seasonal variability. We used data taken with the two most common filters among all the observations.  From them we derived the temperature at a single level in Jupiter’s upper troposphere at 330 mbars of pressure. We also limited our study to within 30° of latitude from the equator in order to preserve the highest spatial resolution of all the observations.

What we found was very unexpected. Various periodicities affecting different temperate to tropical latitudes are evident in the figure below.  The 10-14 year periodicities are intriguingly close to Jupiter’s 11.9-year orbital period but are much larger than models of seasonal variability. The 4- and 8-9 year periods suggest a relationship with the variability of stratospheric temperatures; a closer comparison with the variability of brightness temperatures emitted from the stratosphere, a proxy for ~10-mbar temperatures, shows an anticorrelation that is consistent with a descending thermal wave, representing a “top-down” control of tropospheric temperatures at low latitudes. The 7-year periodicity suggests a relationship with disruption with the same cadence, but limited to the equator.

Possibly the most surprising of all was the presence of anticorrelations of temperature variability between the northern and southern hemispheres that peaked at specific longitudes: 16°, 22° and 30° from the equator; the anticorrelations at 16° and 30° are evident in the blue vs red lines in the figure below. The oscillations at 16° north and south of the equator could be related to deep-seated cylinders parallel to the rotation axis, but such cylinders at 22° and 30° from the equator would intersect an non-transmitting region of metallic hydrogen. So if the connection cannot be via the deep atmosphere, then maybe Jupiter’s atmosphere transmits information horizontally over vast distances, potentially via a spectrum of atmospheric waves.  This behavior is suggestive of similarly teleconnected patterns of variability between the Earth’s two hemispheres, such as the El Nino Southern Oscillation (ENSO) or the North Atlantic Oscillation (NAO), which themselves are not well understood.

A correspondence between the darkening of prominent bands just north and south of the equator appeared to be consistent with the removal of aerosols by heating and sublimation during episodes of warmer temperatures; similarly their brightening was consistent with and the establishment of light-colored aerosols by cooling and freezing during episodes of colder temperatures.

The natural patterns revealed by our long-term study of Jupiter’s atmospheric variability might one day enable a Jovian weather forecast; but before we reach that goal, we must explain the processes driving such patterns.  Beneath all of Jupiter’s highly variable, ever-changing colorful cloud decks are predictable periodic oscillations, teleconnecting regions tens of thousands of kilometers apart.  These may provide a new window onto the processes at work in Jupiter’s hidden interior.  Reproducing these natural climate cycles will be a key challenge for future Jovian atmospheric models. 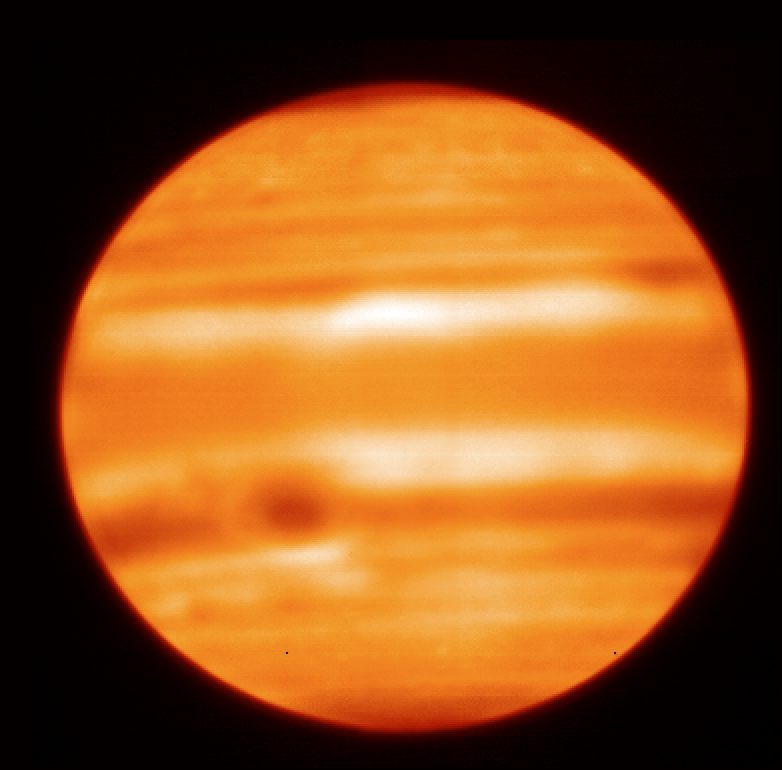