Fast radio bursts are extremely short duration, bright radio flashes that originate from far outside the Milky Way. We performed a detailed study of one particular fast radio burst, and discovered time structure on the order of a few microseconds: 100000 times shorter than the blink of an eye.

Fast radio bursts (FRBs) are bright flashes of radio emission that typically last only a few milliseconds. They originate from distances far beyond our own galaxy. This large distance implies that FRBs are extremely energetic, with some bursts emitting an energy comparable to the amount of energy the Sun produces in an entire day. Since their discovery in 2007, a great deal has been learned about these enigmatic signals but there is still much to understand. For example, it remains a mystery what type of object can produce FRBs, and what emission physics is needed to explain the great amount of energy release in such a short time. One promising model is a neutron star. Observations in early 2020 from CHIME/FRB and STARE2, of a Galactic magnetar (a highly magnetised neutron star), SGR 1935+2154, helped support this hypothesis, as it was observed to emit a bright FRB-like radio burst.

Some FRBs have been seen to repeat (although the majority have only been seen to burst once). Highly active repeating FRB sources are particularly rich sources for follow-up observations. One such source is FRB 20180916B, a repeating FRB first discovered by the CHIME/FRB telescope in Canada. Not long after its discovery, our group began follow-up observations of this source with the European Very-Long-Baseline-Interferometry Network (EVN). The EVN is a global network of radio telescopes which use VLBI to create high-resolution images of radio sources. We used this to pinpoint where the bursts came from to milliarcsecond precision. We identified that FRB 20180916B lives in the arm of a Milky Way-like galaxy and is offset from a nearby star-forming region. As a PhD student this was my first real experience of the fast-paced nature of the field of FRBs and how many avenues of exploration there are. Not only can we use this data to pinpoint exactly where the bursts are coming from, but additionally the bursts themselves contain valuable information about the emission physics and burst progenitor.

Both Benito Marcote and I presented the localisation of FRB 20180916B at a press conference in Hawaii. Afterwards, we celebrated with cocktails on the beach, oblivious to the fact that just a few months later we would only be able to talk through Zoom and several hundred Slack messages a day. It was quite a shift moving from brainstorming what to do next together in our institute to doing everything remotely. We traded white board scrawling for scrap paper covered with equations held up to our laptop cameras. This was also at the beginning of the lockdown, meaning we hadn’t yet learned how to 'unmirror' our Zoom images, so resorted to working out the maths backwards.

Using the same data as in the localisation project, we decided to study the bursts themselves in greater detail. We discovered that the bursts showed consistent polarimetric properties with lower frequency observations of this source, plus another well studied repeater, FRB 20121102A. This supports the idea that repeating FRBs have characteristic polarimetric properties, which is super exciting because it is still debated whether repeating and non-repeating FRBs are simply the same thing. Having some kind of identifier to distinguish between them, as opposed to simply observing multiple bursts, is invaluable both for our understanding of them but also to help future observations be more lucrative by studying sources that ‘look’ like repeaters. I, of course, was delighted with this result and was proud to make a solid contribution to the field. Although while writing this up, we were simultaneously going down various rabbit-holes of exploration with the data and we realised that we had something novel and even more important than first thought.

For me, the analysis that came next was new and exciting and something I hadn’t come across yet in my research. Even within our research group, these techniques had not been explored in detail. Therefore, we consulted Jim Cordes, who has been doing these types of analyses for decades. Additionally, we used a software called SFXC, which is actively used by the EVN to correlate the data, to format our data. In pushing the boundaries with this analysis we consequently pushed the boundaries of SFXC itself. This led to a lot of trial and error and many many (many) data products. I’m sure Aard Keimpema (author of SFXC) ran away from his computer every time he saw an email from myself.

But all the work definitely paid off. In our sample of bursts, we measured time structure on the level of a few microseconds. Not only that, we also see a range of different timescales, from microseconds to milliseconds. This discovery is extremely important as it lets us constrain the size of the region where the burst is emitted. In this case, our analysis constrained the size to on the order of a kilometre. For reference, we know that this source is 500 million light-years away from us. In turn, knowing the scale of the emission region allows us to constrain the source and emission physics that are needed to produce the burst. As mentioned, a neutron star is a good candidate. The models for how a neutron star could have produced this FRB come in two flavours, one where the burst originates from outside the magnetosphere and the other where the burst comes from inside it. Our findings favour the latter and help us hone in on a clearer picture of FRB sources.

This project was a great exercise in getting as much out of a single data set as possible. Our findings add weight to the argument that repeating FRBs have some key identifiers and also help constrain the FRB emission mechanism. Though of course, there is still much to learn, both on this source specifically as well as comparing what we find here with the same analysis of others. Personally, I was delighted to lead my first project and would never have expected my first first-author paper to be published in Nature Astronomy. I love being involved in such a fast-paced area of research and collaborating with a great group of scientists both within the Netherlands and internationally, to uncover the mysteries of FRBs. 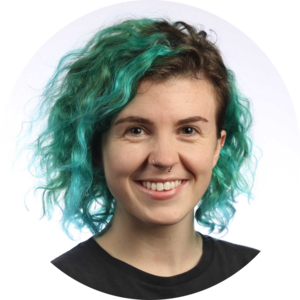 With a source size of only a km, might this be considered a "star quake" type event?