A mysterious gamma-ray heartbeat coming from a cosmic cloud is discovered. The inconspicuous cloud in the constellation Aquila is beating with the rhythm of a neighbouring precessing black hole, indicating a connection between two objects. Just how the cloud's heartbeat is powered remains enigmatic.

The journey starts at 2014 when I was in Barcelona, working at Institute of Space Sciences (CSIC-IEEC). For many times Diego and I had talked about the possible gamma-ray emission from microquasars. Microquasars are binary systems comprising a compact object and a companion star. The material from the companion star accumulates in an accretion disc before falling into the compact object, like water in the whirl above the drain of a bath tub. A part of that matter does not fall down the drain but shoots out at high speed in two narrow jets in opposite directions above and below the rotating accretion disk, influencing the interstellar environment around them. This setting is known from active galaxies called quasars with monstrous black holes with millions of solar masses at their centres that shoot jets tens of thousands of lightyears into the cosmos. Their Galactic scaled-down versions are dubbed as microquasars. As powerful particle accelerators in the Galaxy, gamma-ray emissions are expected from microquasar systems but none was conclusively detected by then.

After several discussions during the period of NewCompstar School 2014 at Barcelona, we chose SS 433, a unique microquasar with powerful jets and outflows, as our target for gamma-ray emission. SS 433 locates in the constellation Aquila, consists of a giant star with about 30 solar masses and a black hole with about 10 to 20 solar masses. Its powerful jet and outflows continuously eject materials to the interstellar space, inflating a nebula around it, the W50 nebula.

Analyzing six years of Fermi/LAT data, no significant gamma-ray emission could be firmly attributed to SS 433 by then. We continuously monitored the source and began the long waiting. After five years, in 2019, a gamma-ray source, Fermi J1913+0515, is identified to be linked with SS 433, showing periodic flux change with the same period of jet precession in SS 433 system. Fermi J1913+0515 is relatively far from the central binary and the jet terminal lobes. It lies in a dark area, and the only notable thing at the location of the gamma-ray excess is a cloud which is ~ 100 light years away from the central black hole.

Detecting a periodicity from SS 433 is actually something expected and predicted, since the precession period itself is long-known. But why the location of the source does not match SS 443 or the jets? What is the origin of the gamma-ray heartbeat from the cloud? We tried direct periodic illumination of the cloud by the jet but it seems unlikely. The helical morphology of the jets is lost after several precession cycles, because of interaction with the surrounding interstellar medium. On the other hand, Fermi J1913+0515 is not located within the extrapolated jet cone. An alternative source for high energy particle injection could be the relativistic equatorial outflow, which precesses in solidarity with the jet and the accretion disk, having a favorable geometry. Through anisotropic diffusion along a flux tube, protons in the relativistic equatorial outflow from SS 433 injected to the cloud region may explain the gamma-ray heartbeat we observed. To maintaining the periodic coherence, it requires the protons to interact in a small clump or cusp of dense molecular clouds. To test this, we just finished 16 hours of observation with IRAM 30m telescope in August 2020. These new observations will help us to identify the expected dense molecular clouds, test and further constrain the possible hadronic origin of the GeV heartbeat observed in Fermi J1913+0515. 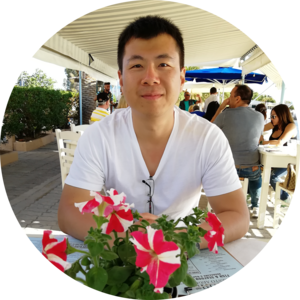