We report the discovery of about 100 young free-floating planets. This is the largest sample to date and it is key to studying the formation of planetary systems.
Núria Miret Roig
postdoctoral researcher, University of Vienna
Follow
Like Liked by Evelina Satkevic
0

A population of free-floating planets in Upper Scorpius that is larger than that predicted by core-collapse models suggests that the ejection of planets due to dynamical interactions early in the lifetime of a forming planetary system is more common than prevoiusly thought.

I started my PhD back in 2017 with the ultimate goal of understanding how stars form. Then, what do planets have to do in understanding the star formation process? Everything! Free-floating planets1 are an additional outcome of the star formation process and they are especially interesting because their lightness makes them more sensitive to the initial conditions and to dynamical interactions. However, their nature and origin remain unknown: do they form like stars through the gravitational collapse of small clouds of gas? Or do they form like planets around stars and are then dynamically ejected or stripped off? While it is known that both mechanisms can produce free-floating planets, their respective contributions are still an open question due to the lack of a large homogeneous sample.

We decided to start searching for free-floating planets in the Upper Scorpius young stellar association because it is one of the closest star-forming regions to the Sun. Its richness (in the number of sources) and proximity make this region an excellent area for hunting planets. We started by collecting all the images available in this region plus our observations. This was one of the most exciting parts of my PhD since I got the opportunity to visit some of the greatest telescopes on Earth (see Fig.1)! We compiled over 80 000 wide-field images adding up to around 100 TB. Clearly, this huge amount of data led to some difficult times in the beginning and we had to come up with new pathways and ideas, based on modern statistics and big data techniques. However, after some months of hard work, we managed to build the largest catalogue of proper motions (i.e., motions across the plane of the sky) and multi-wavelength photometry in this huge area (170 degrees squared).

We identified up to 170 free-floating planets2 members of the Upper Scorpius young stellar association (see Fig. 2). This is by far the largest sample of free-floating planets in a single association, and almost doubles the number of free-floating planets known to date over the entire sky. Identifying free-floating planets is a major challenge, in many ways, similar to the “needle in the haystack” parable. One must identify the rare planetary-mass members (the “needles”, typically a few hundred) within the overwhelming multitude of field stars and background galaxies (the “haystack”, millions of interlopers). Again, we solved this problem thanks to modern statistical tools developed by our team and a lot of patience… The identification of members took another few months of trial and error until, one day, we arrived at the office and the computer had finished the calculations: we had a list of members of the Upper Scorpius association to be analysed. We quickly plotted the magnitude distribution of all the members of the region (see Fig. 3) and, immediately, we realised a high density of very faint objects: these are the planets we were looking for! That was certainly one of the greatest moments of my PhD! All of a sudden the efforts were worth it!

Not only did we find a large fraction of objects, but we also unambiguously identified a dip at planetary masses (7–13 MJup). The fact that we observed this dip in such a young sample (1-10 Myr) indicates that it is likely related to the origin of these objects. Could this be the ‘real’ frontier between brown dwarfs and free-floating planets? Could this indicate the boundary between different formation mechanisms: core-collapse and ejection from planetary systems? Surely more research will be needed to definitely answer these questions but one of the take-home messages of our study is that a fraction of the free-floating planets we discovered formed like low-mass stars and another in planetary systems. Both mechanisms are needed to explain the large fraction of planets that we found.

The free-floating planets discovered in this study are excellent targets for follow-up studies, for instance with the James Webb space telescope. In particular, they will be essential to study planetary atmospheres in the absence of a blinding host star, making the observation far easier and with greater detail. The comparison with atmospheres of planets orbiting stars will provide key details about their formation and properties. Additionally, studying the presence of gas and dust around these objects, what we call "circumplanetary disks", will shed more light on their formation process.

Extrapolating the fraction of free-floating planets that we measured in Upper Scorpius to the entire Milky Way, there should be several billions of Jupiters roaming the Milky Way without a host star. This number would be even greater for Earth-mass planets since they are known to be more common than massive planets. Although these numbers are just speculations in the present, they illustrate the vast amount of planets waiting to be discovered.

[1]  Free-floating planets are celestial objects with masses of less than 13 times the mass of Jupiter which are not bound to a star but just roam among them.

[2] We identified between 70 and 170 free-floating planets. The uncertainty in the number of planets comes from the lack of precise ages. Planets are born relatively bright and fade with time, so it is easy to confuse a young low-mass planet with a slightly older and more massive one.

The credit for the top poster image is ESO/M. Kornmesser

This research was presented in the paper “A rich population of free-floating planets in the Upper Scorpius young stellar association” to appear in Nature Astronomy (DOI: 10.1038/s41550-021-01513-x). It is part of the COSMIC-DANCE project led by H. Bouy and the main result of N. Miret Roig for her PhD.

This research has received funding from the European Research Council (ERC) under the European Union’s Horizon 2020 research and innovation programme (grant agreement No 682903, P.I. H. Bouy), and from the French State in the framework of the ”Investments for the Future” Program, IdEx Bordeaux, reference ANR-10-IDEX-03-02. It has been possible thanks to the extensive use of data from ESO, NOAJ, NOIRLab, ING, CFHT, VISIONS and the ESA mission Gaia. 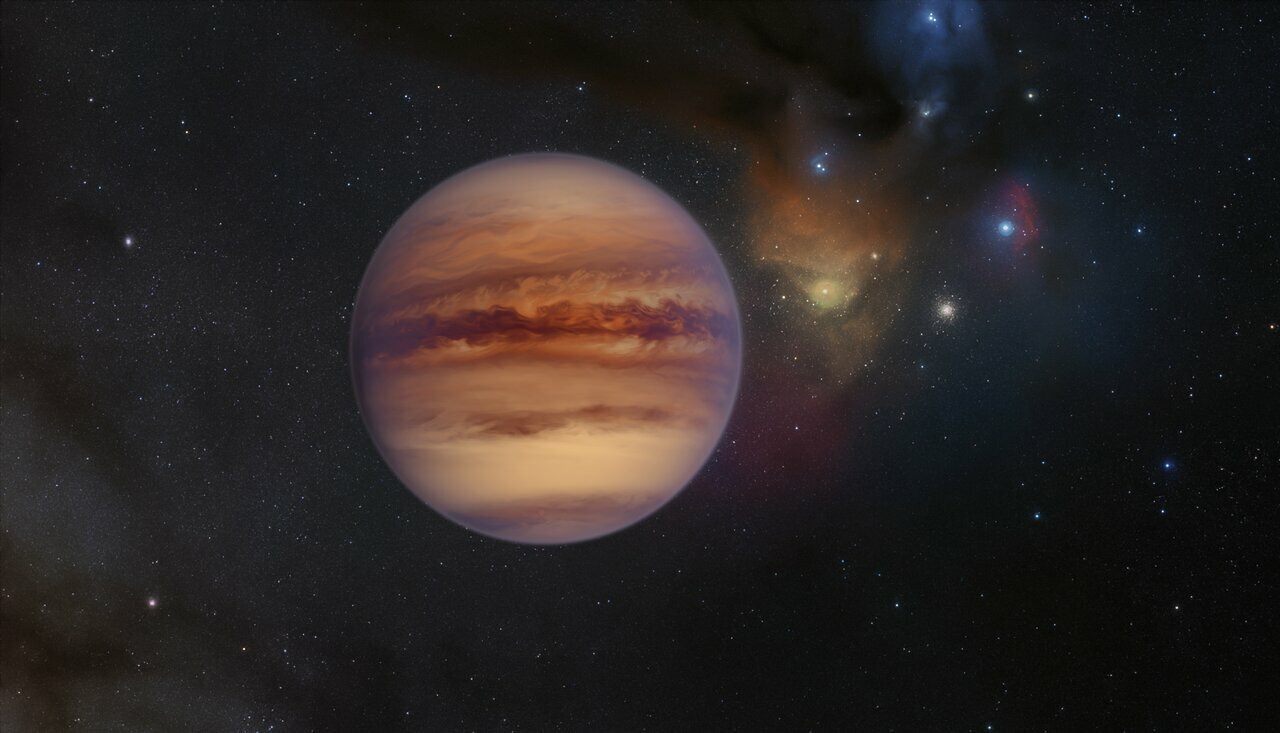 We report the discovery of about 100 young free-floating planets. This is the largest sample to date and it is key to studying the formation of planetary systems.