Forty-four years since the Luna 24 mission in 1976, China’s Chang’E-5 mission returned new lunar samples from a region called Procellarum KREEP Terrane. What does the new lunar sample tell us about how the Moon evolved?
Wei Yang
professor, Institute of Geology and Geophysics, Chinese Academy of Sciences
Follow
Like Liked by Evelina Satkevic
0

Isotopic analysis of basalt clasts returned from the Moon by the Chang’e-5 mission indicates that the rocks were derived from a mantle source that lacked potassium, rare-earth elements and phosphorus.

You likely have never heard of KREEP before, but it is one of the focuses of lunar scientists.

KREEP, an acronym built from the letters K (for potassium), REE (for rare-earth elements) and P (for phosphorus), is a distinctive geochemical component of some lunar rocks.

Early in its history, the Moon was believed to be covered by a “magma ocean” hundreds of kilometers deep. As the magma ocean proceeded to crystallise, “incompatible” elements—those that get concentrated in the liquid phase during magma crystallisation—such as uranium (U), thorium (Th), potassium (K), rare earth elements (REE), and phosphorus (P) are continuously enriched in the remaining melt.

KREEP was the last dregs of the magma ocean. As such, KREEP earned its namesake and became enriched in incompatible elements. Then, in the final act of the magma ocean evolution, KREEP was emplaced between the lunar crust and mantle (Figure 1).

However, except for a small number of lunar return samples and meteorites that include KREEP components, an actual rock of full-fledged KREEP composition has not been found. Nevertheless, the KREEP component has been considered to be at the center of a long-standing problem in lunar science: why volcanic activity on the Moon lasted for several billions of years.

The Moon is only 1% the mass of Earth. At that strikingly small size, theoretically at least, it should have been completely solidified quickly. A widely accepted hypothesis is that radioactive elements (U, Th, and K) supplied the heat necessary for the late volcanic activity. Because KREEP is enriched in radiogenic elements U, Th, and K, it is therefore thought to be responsible for having kept the Moon warm and geologically active.

This hypothesis appears to be supported by orbital observations of “mare” basalts, the “sea” of lava flows that give the Moon its darker shades. The youngest mare basalts—the products of the enigmatic young volcanic activity on the Moon—are mainly found in a region called the Procellarum KREEP Terrane on the nearside of the Moon. This region is rich in thorium (Th), probably indicating enrichment of the KREEP component.

The coexistence of young magmatism and elevated Th is certainly suggestive. It is believed that the heat generation of radioactive elements in the KREEP component is the main factor that sustained long-lasting volcanism on the Moon.

However, this hypothesis has never been tested with samples of young lunar basalts. Neither the US Apollo mission, the former Soviet Union Luna mission, nor the lunar meteorites have provided samples of the youngest basalts on the Moon.

For this reason, China's Chang'E-5 mission chose to target samples from one of the youngest mare basalt units on the Moon.

What contribution did KREEP make to the youngest lunar magmatism? With this question in mind, we investigated the Chang'E-5 lunar basalt in our Nature paper.

This is the problem we faced. After studying the mineral and chemical composition of the Chang'E-5 basalt, we found that it is richer in incompatible elements than the Apollo and Luna basalts. This could result from the contribution of KREEP or, as just discussed,  it could simply reflect an extensive crystallisation process.

Therefore, we had to use another tool as our disposal: isotopes, such as those of strontium (Sr), neodymium (Nd), and lead (Pb). Isotopes are a more effective way to identify the KREEP component as they are like the DNA of a rock and will not change through the magmatic evolution.

However, another difficulty lies in the small size of the basalt clasts in the Chang'E-5 lunar regolith. It is difficult to obtain the isotope ratios of the Chang'E-5 basalt—but technology to the rescue!

Fortunately, the LA-ICP-MS (laser ablation inductively coupled plasma mass spectrometry) laboratory of the Institute of Geology and Geophysics, Chinese Academy of Sciences (IGGCAS) in Beijing, has been developing the in-situ analysis method for more than ten years. Using this state-of-the-art technology, we obtained the Sr isotopes of the mineral feldspar and Nd isotopes of the mineral merrillite at 80-micron and 20-micron scales, respectively.

The Sr and Nd isotope results were beyond our greatest expectations (Figure 3). The Chang'E-5 basalt, the youngest basalt dated on the Moon so far, formed 2.03 billion years ago, originated from a depleted mantle source with a KREEP component less than 0.5% weight percent. In other words, KREEP is “missing” in the origin of the Chang’E-5 basalts.

This discovery indicates that KREEP is not as widely distributed as previously thought, and that the KREEP association may not be a prerequisite for young mare volcanic activity on the Moon.

However, what mechanism induced the young volcanic activity on the Moon is still unanswered. Our work will continue to try to solve this puzzle.

My research focuses on isotope geochemistry. At the Institute of Geology and Geophysics Chinese Academy of Sciences, I operate the NanoSIMS laboratory. In the past decade, my main interest was Mg isotope geochemistry and its application in tracing the deep carbon cycle. I am currently working on the formation and evolution of the Moon based on the exploration data and returned samples of the Chinese Lunar Exploration Program. 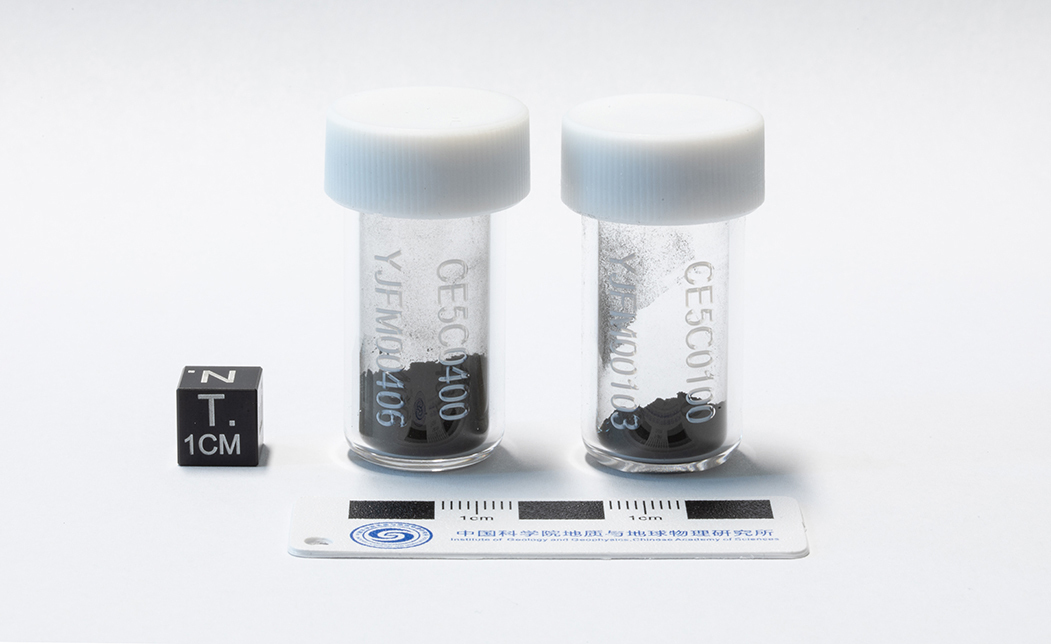 Forty-four years since the Luna 24 mission in 1976, China’s Chang’E-5 mission returned new lunar samples from a region called Procellarum KREEP Terrane. What does the new lunar sample tell us about how the Moon evolved?