Basalt samples returned from the Moon by the Chang’e-5 mission are revealed to be two billion years old by radioisotopic dating, providing insight on the volcanic history of the Moon.

As you stare at the Moon, it looks like a cold and quiet place. But it wasn’t always that way.

The question of when the Moon was last geologically active has loomed large for decades.

The samples returned from the Apollo and Luna missions were generally all quite old in age. These first lunar rock collections were critical for understanding what the Moon was like in its early active years.

But these existing samples were scant when it came to understanding the Moon’s later years. The youngest dated rock from these pioneering missions and lunar meteorites was only 2.8–2.9 billion years old.

This is the story of the team of scientists at the Institute of Geology and Geophysics, Chinese Academy of Sciences (IGGCAS) in Beijing that came together in a matter of only weeks to provide a high-quality, precise age for the Chang’E-5 basaltic rocks.

The best way to date a rock is with radioisotopic dating (more on that later!). But if one wanted to try and predict which rocks might yield the youngest radioisotopic date, some clues needed to be used when picking the Chang’E-5 landing site—impact craters to the rescue.

The dimply surface we see when we look up at the Moon, particularly through a telescope, is due to the many asteroids that have collided with it over billions of years. Older rocky regions have incurred more impact craters over time, and regions of younger rocks have less craters.

This method of chronology, known as crater counting, is critical for dating the surface of planets and moons such as Mercury where we have never collected samples. But everything relies on the Moon, because this is only place where we can calibrate the results from crater counting with radioisotopically dated samples.

The Chang’E-5 mission therefore had its eye on a rocky region where fewer craters had accumulated as compared to Apollo and Luna landing sites. And there were other clues that the target region might indeed be quite young in age based on the composition of the rocks in the area.

The selected landing site was located in a region known as the Procellarum KREEP Terrane. KREEP is an acronym for lunar rocks that are uniquely abundant in potassium (K), rare earth elements (REE), and phosphorous (P).

Each of these KREEP elements are said to be “incompatible” as they prefer to stay in the magma and are reluctant to be incorporated into crystallised minerals. Because of this, they only become abundant in a lava after a lot of minerals have crystallised and they get concentrated in the remaining magma left in the chamber.

Every clue therefore seemed to indicate that the Chang’E-5 samples had the potential for being some of the youngest basaltic rocks returned from the Moon. But we were still nervous when the moment of truth came and the first radioisotopic data came up on the screen.

Radioisotopic dating works on the principle that radioactive elements have constant decay rates. Measure the relative abundances of the parent and daughter isotopes and you know how long the decay has been taking place. As the rocks on the Moon are billions of years old, we must use an isotopic system with a long half life. The gold standard at such an age is the decay of uranium (U) to lead (Pb).

Our palms were sweaty as we loaded the sample and turned on the mass spectrometer. When we saw the age it spit out, we couldn’t believe our luck. But we wanted to be sure.

So we measured everything we could. In total, we analyzed 47 different rock fragments and minerals that we were able to extract from the sample materials that the China National Space Administration had provided us. And sample after sample, we kept getting the same result.

We had just dated the youngest rock on the Moon at 2, 030 ± 4 million years old. The Chang’E-5 mission was a success. The new age extended the life of lunar volcanism 800–900 million years longer than previously known.

But our work had told us more about the young rock than just its age. The U-Pb isotopic composition allowed us to fingerprint the source of the magma from the mantle, the thick layer beneath the lunar crust.

And although the age of the rock had come out as we had expected, the mantle source came as a surprise. Even though Chang’E-5 had sampled the KREEP Terrane (Fig. 2), the mantle source of its magma was the opposite of KREEP-like. Instead of being rich in heat-producing elements like K and U, the U-Pb isotopic compositions indicated scarcely little U.

Because KREEP components are rich in heat-producing K, one theory for the persistence of late volcanism in the KREEP Terrane was that the mantle there had been melted by radiogenic heating. But our new results threw a wrench in that hypothesis.

Putting our two findings together—the young age of the basalt and its U-depleted mantle source—now creates a new enigma for the new frontier of lunar science to solve. On one hand, the small Moon appears to have taken longer to cool than expected. On the other hand, one leading heat source thought to have sustained lunar volcanism is not supported by our results.

In a companion paper to ours in Nature, our colleges have looked deeper into whether a KREEP-like mantle source can truly be ruled out, as well as into other potential mechanisms for fueling such young volcanism on the Moon.

The cherry on top is that the new 2 billion-year-old age of the Chang’E-5 basalts fills a large gap in the crater counting chronology. Radiometrically dated Apollo and Luna samples had calibrated both the older and the younger portions of the crater chronology curve. But the critical middle portion had remained unanchored—until now.

We hope these new findings usher in a new generation of lunar exploration and young scientists. 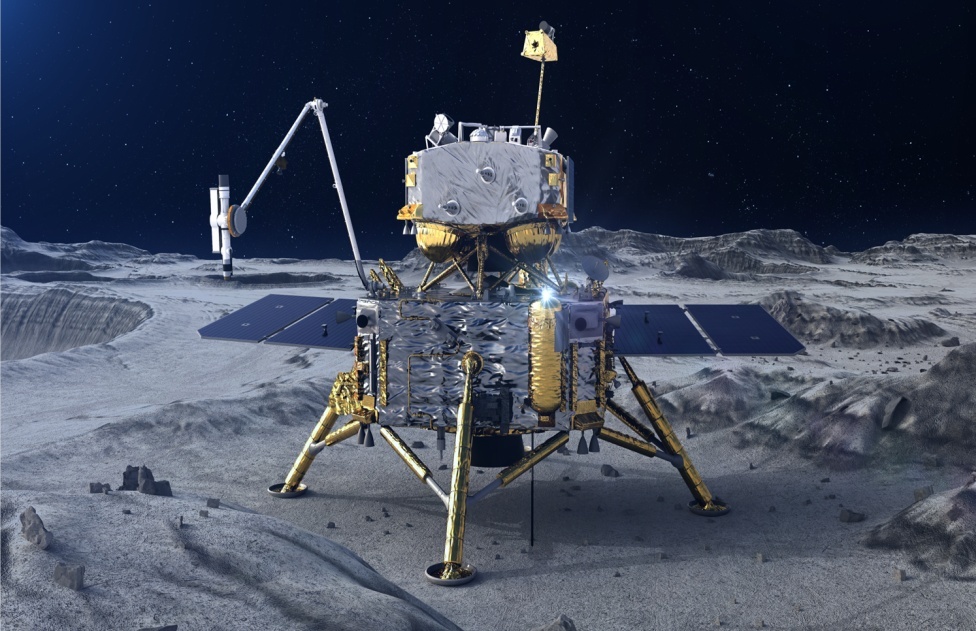