The origin of the plateau phase observed in the early X-ray light curve of gamma-ray bursts (GRBs) has been debated since its discovery in 2005. Here we show that the plateau phase can be explained within the classical fireball model by considering an expanding outflow that is ejected with a Lorentz factor lower than typically assumed. Therefore, the gap of the inferred Lorentz factors in active galactic nuclei and in GRBs no longer exist.
Hüsne Dereli-Bégué, Asaf peer & Felix Ryde
3 contributors
Like Liked by Evelina Satkevic and 2 others
1

The origin of the plateau observed in the early X-ray light curves of gamma ray bursts (GRBs) is debated. Here, the authors show that the observed plateau can be explained within the classical GRB model by considering expanding shell with initial Lorentz factor of a few tens.

Gamma-ray bursts (GRBs) are one of the most energetic explosions known in the Universe, having the most relativistic outflows, with initial Lorentz factors (Γ = 1/√(1-(v2/c2))  where v is the velocity of the outflow and c is the speed of light) of a few hundreds. They are classified into two classes, long and short, depending on their burst duration in the γ-rays. Long GRBs originate from the collapse of a massive star, with a Wolf-Rayet star, emitting a strong stellar wind, as the most likely progenitor. Sort GRBs may be the product of the merger of two neutron stars or a neutron star and a black hole.

Many of these GRBs display a long (up to thousands of seconds) plateau phase after the initial burst of γ-rays. This phase was initially observed in 2005 by the Neil Gehrels Swift Observatory in the X-ray light-curve of a significant fraction - more than 56% of GRBs. In this phase, the X-ray flux decreases much slower than theoretically expected. This is one of the most puzzling results known and has been discussed by the Astronomy community for several years and various ideas have been raised about its origin. All of these ideas require an external addition to the classical fireball model, and in some cases, they cannot address all aspects of the plateau phase. Most of the ideas fail because they cannot explain the energy needed to explain the plateau phase.

A second puzzling result, which is less widely discussed is how come the inferred Lorentz factor of GRBs is so high, and in many cases, Γ ≥ 100? In other jets from astronomical objects, Γ is no more than a few at most.

I started to look into this problem after I joined Bar Ilan University, two years ago. Eventually, together with my collaborators, we managed to show that the observed signal during the plateau phase in both the X-ray and the optical bands is naturally obtained within the classical GRB fireball model, provided that (i) the initial Lorentz factor of the relativistically expanding jet is of the order of a few tens, rather than a few hundreds, as is often cited in the literature, and (ii) the expansion occurs into a medium-low density wind with density typically up to two orders of magnitude below the expectation from a Wolf-Rayet star.

Within this framework, the end of the plateau phase marks the transition to the beginning of the regular afterglow. The plateau phase corresponding to the coasting phase when the jet moves with a constant velocity, only slightly affected by the circumburst environment. In contrast, the regular afterglow is described by the self-similar expansion phase, which follows scaling laws first derived by Blandford & McKee (1976). This result therefore implies that the long GRB progenitors are either (i) not Wolf-Rayet stars, or (ii) the properties of the wind ejected by these stars prior to their final explosion are very different than the properties of the wind ejected at earlier times.

There are several ways of inferring the value of the Lorentz factor in GRB jets. The most widely used method is the opacity argument which is commonly used in deducing that observed GeV photons by Fermi-Large Area Telescope (LAT) must originate from a region expanding with a Γ ≥ 100. The second method relies on identifying an early optical flash and interpreting it as originating from the reverse shock. Third one is, when a strong thermal component exists during the prompt phase, it is possible to use it to infer the Lorentz factor at the initial phase of the expansion.

We find that in all cases where there is any evidence for an initial Lorentz factor a few hundreds, no X-ray plateau exists, and vice versa: for all bursts that show a plateau, no significant indication for high Lorentz factor exist, neither at high energy, thermal or optical photons.

As it can be seen in Figure below, our result shows that the range of Lorentz factors in GRB jets is much wider than previously thought, and bridges an observational gap between mildly relativistic jets inferred in active galactic nuclei, Γ ≤ 20, to the much higher Lorentz factors, Γ < 1000 inferred in a few extreme GRBs.

Furthermore, this model provides several testable predictions about bursts with long plateau phases. Such bursts (i) are not expected to show high energy (> GeV) emission; (ii) are not expected to show a strong thermal component; and (iii) the typical variability time during the prompt phase is expected to be long, on the order of few seconds. Therefore, the future missions, e.g., SVOM satellite will play an important role to test these predictions by increasing the multi-wavelength samples both in γ-rays, X-rays as well as in optical bands, by triggering more optical follow-up observations. 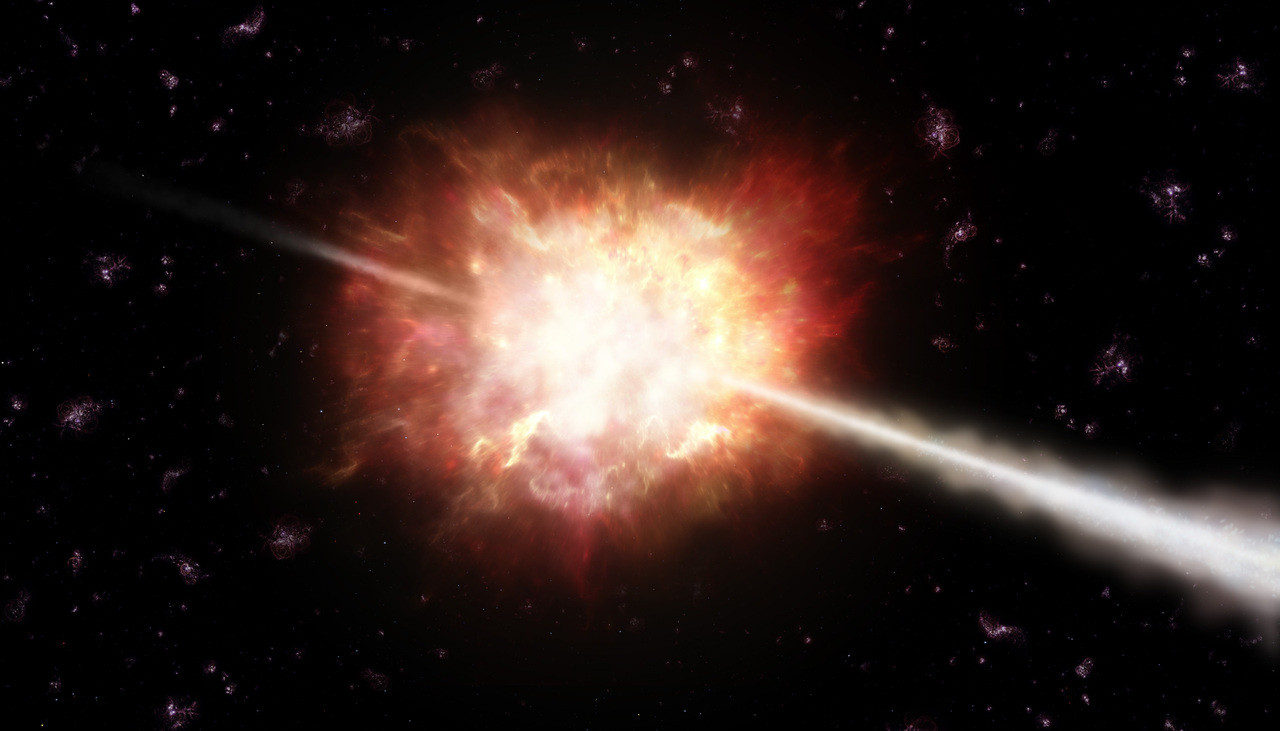 The origin of the plateau phase observed in the early X-ray light curve of gamma-ray bursts (GRBs) has been debated since its discovery in 2005. Here we show that the plateau phase can be explained within the classical fireball model by considering an expanding outflow that is ejected with a Lorentz factor lower than typically assumed. Therefore, the gap of the inferred Lorentz factors in active galactic nuclei and in GRBs no longer exist.