Solar eruptions can sometimes be failed. The causes of failed solar eruptions are still under debate. Using data-driven MHD simulations, we find that the Lorentz force due to the non-axisymmetry of the magnetic flux rope can constrain the eruption.
Mingde Ding
Professor, Nanjing University
Follow
Like

The competition between different components of the Lorentz force defines whether a solar eruption fails or not. Here, the authors show a new Lorentz force component, which plays a major role in preventing magnetic flux ropes from erupting successfully.

Solar eruptions, which are usually referred to as coronal mass ejections (CMEs) and solar flares, are the cause of disastrous space weather. They can be either successful, in which both CMEs and flares are launched, or failed, in which only flares occur without any CMEs. The two types of eruptions have different impacts on the space environment. Therefore, in order to predict the space weather, we need to explore two key questions: what mechanisms trigger the solar eruptions and what factors determine if they are successful or failed. While there are a large number of studies devoted to the first question, the second question is less studied and largely unknown.

It is commonly accepted that the basic magnetic structure of a solar eruption is the magnetic flux rope, in which the magnetic field lines wrap around a central axis. A widely used theoretical model for predicting if a solar eruption is successful or failed is the torus instability model. This model considers a thin magnetic flux rope beneath an overlying magnetic field. The overlying poloidal field (perpendicular to the axis of the flux rope) produces a downward strapping force which counteracts the upward hoop force of the flux rope. In the case that the overlying field decays with height fast enough, the strapping force can no longer balance the hoop force and the flux rope can escape from the solar surface, thus yielding a successful eruption. Otherwise, the eruption is failed. A quantitative parameter to discriminate between the success and failure of an eruption is the critical decay index of the overlying field, which lies in a range of 0.8-1.5, depending on different studies. Such a critical decay index has been largely used in observational studies that try to explain the eruption behavior. However, in quite some cases, such a criterion does not work, in which the decay index exceeds the critical value but the eruption is still failed.

A recent study (Myers et al. 2015, Nature, 528, 526) revealed that another force component, the tension force generated by the toroidal field along the flux rope, can also play an important role in constraining the eruption. Such a scenario has been nicely tested through laboratory experiments. However, it is still unknown if this mechanism works in a real solar eruption and if there are other factors missed in previous models which can change the eruption behavior.

Motivated by the above thoughts, the Solar Physics Group at Nanjing University, including Ze Zhong (Ph. D. student), Yang Guo and myself, initiated a project investigating the causes of failed solar eruptions. To this end, we have developed a data-driven MHD simulation code to model various solar eruptions (Guo et al. 2019, ApJL, 870, L21). In particular, we have modeled a failed eruption that really occurred on 30 January 2015 (Fig. 1). In the simulation, the bottom boundary is updated with time-varying observed quantities (vector magnetic fields and velocity fields), and therefore the evolution of the flux rope can be reproduced with high fidelity. The simulation successfully reproduces what have been observed in the failed eruption, a solar flare without a CME. This enables us to analyze in detail what factors make the eruption finally failed.

We also find that in this event, the strapping force can change direction from downward in the initial phase to upward in the later phase, resulting from a change of the overlying poloidal field. Thus, in the later phase, it is the non-axisymmetry induced force, but not the strapping force, that plays the major role in constraining the eruption. This also implies that, in order to accurately predict an eruption, one needs to consider the geometrical structure of the flux rope and also the time variation of the overlying field. It is insufficient to judge the eruption behavior solely based on the decay index of the background field at one specific time. 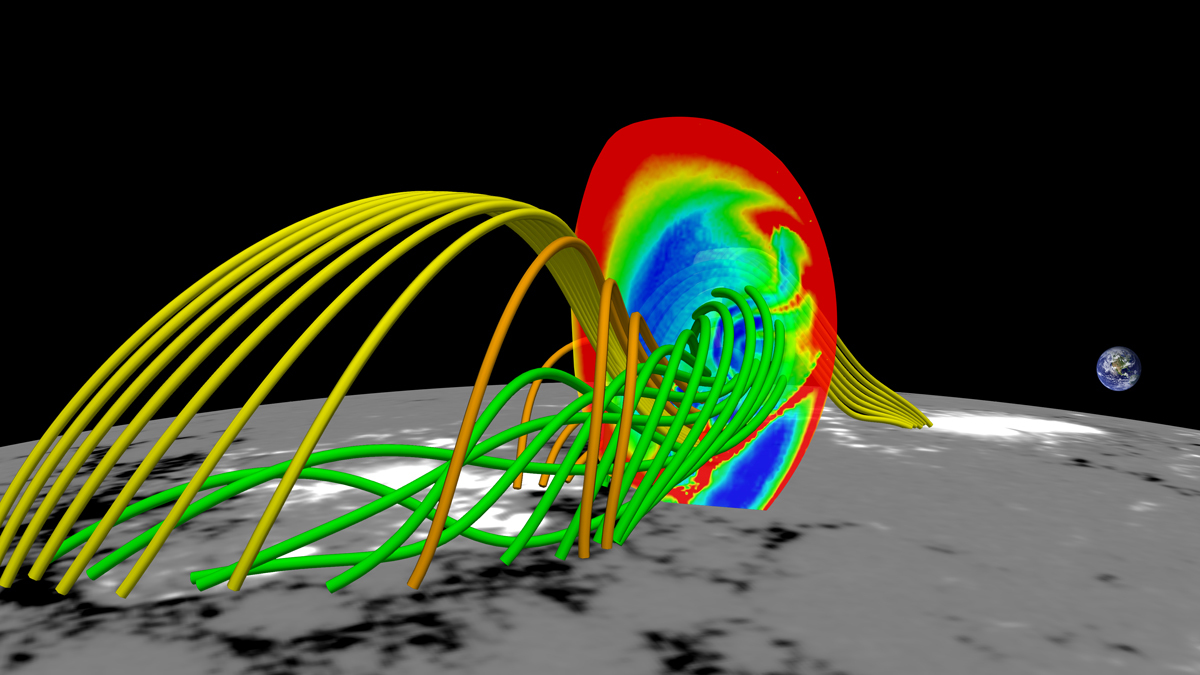 Solar eruptions can sometimes be failed. The causes of failed solar eruptions are still under debate. Using data-driven MHD simulations, we find that the Lorentz force due to the non-axisymmetry of the magnetic flux rope can constrain the eruption.