The elusive 21-cm line from atomic Hydrogen encodes a wealth of information about the early Universe, when the first cosmic structures formed. A novel experimental approach is aimed at explaining the effect of instrumental systematics when trying to unlock the mysteries of the Cosmic Dawn.
Eloy de Lera Acedo
Ernest Rutherford Fellow, University of Cambridge
Follow
Like Liked by Evelina Satkevic

The Radio Experiment for the Analysis of Cosmic Hydrogen (REACH) aims to detect the sky-averaged 21-cm neutral hydrogen line from the early Universe by jointly analysing the cosmological signal, foreground emission and systematic effects.

How did the Universe transition from a mostly empty volume after the Big Bang to a complex realm of stars, galaxies and other celestial objects? This unknown process occurred during the so-called Cosmic Dawn and the Epoch-of-Reionziation. 21-cm radio-cosmology is the field of research promising to unlock the secrets of the infant Universe by studying radio signals from the most abundant element in the Universe: hydrogen.

In the plot in Fig. 1 the black line is the brightness temperature of the 21-cm line, with the “0” baseline corresponding to the Cosmic Microwave Background (CMB) temperature. The 21-cm line has a direct dependency on the optical depth of the intergalactic medium and therefore on fundamental cosmological parameters like for example the Hubble constant, H, or the column density of neutral Hydrogen, nHI, both redshift dependent.

During the Dark Ages, at high redshift, the gas was cooling adiabatically leading to a gas temperature colder than the CMB. Collisions between elementary particles and the gas coupled the spin temperature to the gas temperature and the 21 cm line could be seen “in absorption” against the hotter background (blue area of the plot). Eventually this collisional coupling became inefficient as the gas density decreased in the expanding universe.

After the Cosmic Dawn and the birth of the first stars, Lyman alpha photons from the newly formed celestial objects coupled again the hydrogen spin temperature to the colder gas temperature, therefore allowing us to see the line again “in absorption” (the green area of the plot).

Later on, x-rays from the early celestial objects would heat the gas, eventually above the CMB temperature, and the 21-cm line could be seen in emission. Finally, UV photons from the first massive galaxies would ionized the remaining neutral hydrogen until the universe became transparent to short wave light again.

The 21-cm line can therefore be used as a cosmological clock to time the early evolution of the Universe and answer WHEN and HOW the main cosmological events happened.

Radio-interferometers have already placed upper limits on the 21-cm power spectra, while it is the single-antenna experiments, measuring the 21-cm signal averaged across all directions in the sky, the ones that are promising even earlier breakthroughs. The EDGES experiment shook the field in 2018 reporting a cosmological signal twice deeper than expected requiring exotic physics to be explained. This has been contested by several groups amid concerns on the data analysis and potential impact of hardware systematic signals, including recent measurements from the SARAS3 experiment incompatible with the EDGES findings. The contamination from instrument systematics is the main bottleneck for "1st generation" 21-cm radio telescopes. Aiming to resolve these concerns, a new experimental approach has emerged over the last 5 years giving birth to a 2nd generation of experiments. REACH is a sky-averaged experiment leading this new wave of instruments, where the focus has shifted to a data-driven hardware and algorithm design focusing on the detection and isolation of instrumental systematic signals. To this end REACH uses a fully Bayesian data pipeline to jointly fit instrument models with models of the sky signals.

The spectral and spatial structure of the sky foreground signals (nearly 100,000 times brigther than the 21-cm signal) couple with the spectral and spatial variations of the antenna on the ground, resulting (even for a simple dipole antenna) on antenna temperature variations hardly model-able with a simple low-order polynomial, and highly dependent on Local Siderial Time (LST) and integration times. In order to tackle the aforementioned concerns over the EDGES results (and their tension with the recent SARAS3 results), REACH’s unique approach consists on isolating instrumental systematic signals from the cosmological signals. A convincing detection of the 21-cm signal should require that the foreground models are independent from the instrument models and the cosmological models, and the correlation between their parameters needs to be clearly explained and isolated in the data analysis. This should also be done using physics rooted models, field measurements and supported by robust statistical inference. In order to achieve this, REACH uses a Bayesian calibration and data analysis pipeline where correlation between all the different parameters of the instrument, foreground and cosmological signal models can be jointly explained in a statistical manner. REACH has been designed to avoid instrumental systematic signals in the first place, but then in order to deal with any residual systematic effects, the collaboration has used a simulated version of this pipeline to design an instrument where all the 3 signal spaces are largely orthogonal. REACH is currently being deployed in the RFI-quiet Karoo radio reserve in South Africa (see Fig. 2), location of HERA, MeerKat, and the future SKA1-Mid. REACH will commence commissioning in late 2022 after nearly 4 years of development.

Other novelties featured in REACH include:

The research was supported by the Kavli Institute for Cosmology in Cambridge (UK), the National Research Foundation (South Africa), the Cambridge-Africa ALBORADA trust (UK) and the Science and Technology Facilities Council (STFC), part of UK Research and Innovation (UKRI). 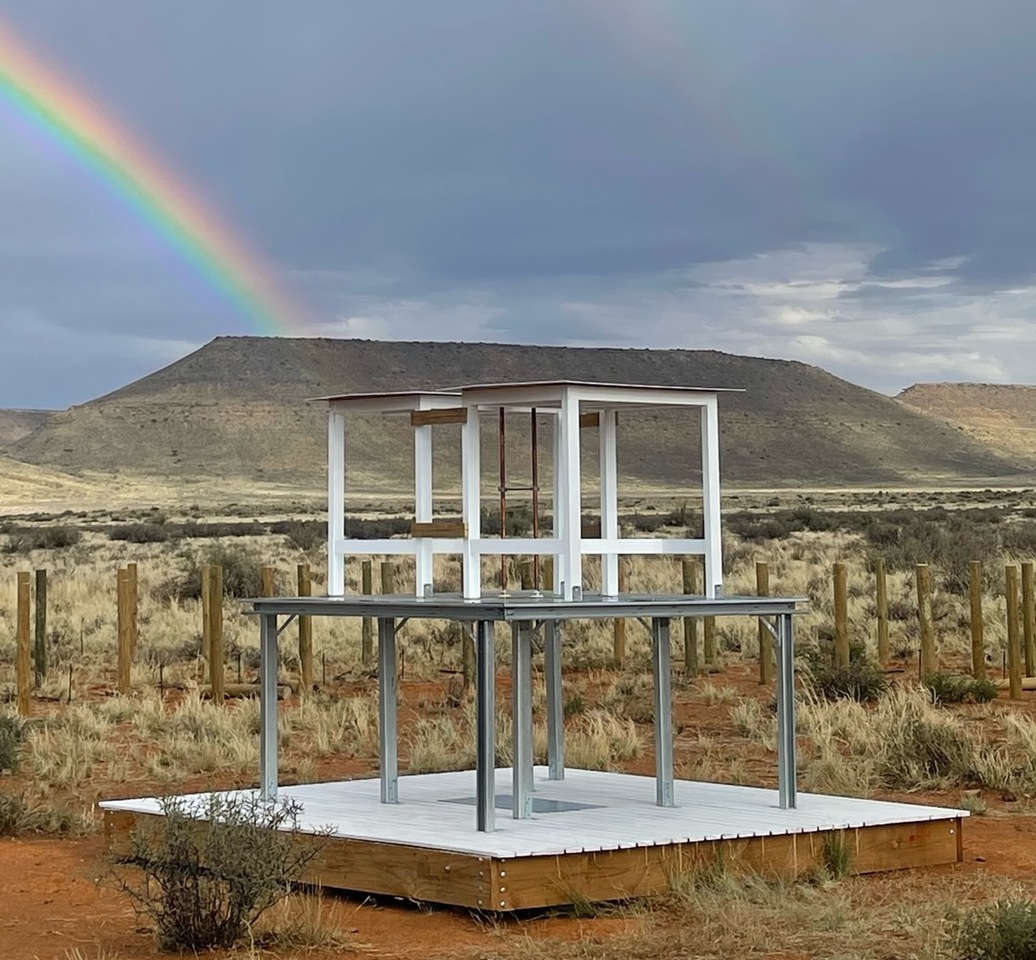 The elusive 21-cm line from atomic Hydrogen encodes a wealth of information about the early Universe, when the first cosmic structures formed. A novel experimental approach is aimed at explaining the effect of instrumental systematics when trying to unlock the mysteries of the Cosmic Dawn.