Dark matter remains elusive. With the next generation of redshift surveys we plan to directly trace and "see" the underlying dark matter distribution by identifying galaxy groups and pairs, and the filaments that connect them.
Simon Driver
Professor, Univiversity of Western Australia
Follow
Like Liked by Isatou Sarr
0

The challenge of measuring and mapping the missing baryons - Nature Astronomy

The missing baryon problem may now be resolved, but the exact location and physical properties of the diffuse component remains unclear. This problem could be tractable, but requires a combination of new galaxy redshift surveys and new X-ray and radio facilities.

In our recent Nature Astronomy Comment, we outlined a new approach to measuring the baryon density, by first detecting groups, pairs, filaments, and voids, and later stacking the X-ray (eROSITA) and radio (ASKAP) data at these well defined space-time locations. The goal is to tease out the very weak signal from the hot and warm plasma (X-ray), and the cold neutral gas (21cm). While this approach is challenging, it offers a novel and possibly unique route to detecting the baryon contents  (i.e., plasma, stars, and gas) as a function of halo mass, and in due course with look-back time.

A by-product is that we will also build up a direct map of the bulk of the dark-matter distribution, as defined by the dark matter halo catalogues that we will detect in our upcoming ESO 4MOST WAVES survey. 4MOST is ESO's upgrade to the VISTA telescope, and will use an "echidna" fibre positioning system (AESOP) designed and built at the Astralis laboratory in Sydney, Australia. The facility should commence operations in late 2023, and will be used to conduct a series of consortium and community surveys covering a broad range of topics from Galactic Structure to Cosmology. The largest of the extragalactic surveys is the Wide Area VISTA Extragalactic Survey (WAVES) led from the University of Western Australia's International Centre for Radio Astronomy Research (ICRAR) and the University of Hamburg Observatory.

In due course WAVES will conduct two surveys, and these will collectively measure the distances to almost 2million galaxies via spectroscopy (redshifts). While not as large as some of the spectroscopic programs now commencing, it is unique in endeavouring to obtain exceptional high-completeness (>90%) over more modest regions of sky, i.e., density and completeness are prioritised over sky coverage and hence dark matter studies over dark energy studies. It is this contiguous high-density nature of the WAVES program which is critical for identifying lower mass haloes, finer filaments, and void extents.

WAVES-Wide will cover over 1100 square degrees of sky, allowing us to study the properties of very low mass galaxies and the very fine filamentary and tendril structures. The WAVES-Deep survey will cover 66 square degrees, including a contiguous 50 square degree region, and four smaller 4 square degree outlier fields aligned with the Vera C. Rubin Observatory's, LSST Deep Drilling Fields. WAVES-Deep promises to unveil the dark-matter structure over almost half the look-back time of our Universe, and where we expect to see significant growth in the halo mass function and a narrowing of filaments and growth of void definition as the dark mater flows out of the voids, into the filaments, and into the halos.

The dark matter is revealed through the velocity dispersions of the galaxies bound within their collective halo. The faster the galaxies move within their halo, the greater the dark mater mass. As the haloes lie along filamentary structures, linking of the haloes then unveils the filamentary structure, with the most massive haloes typically lying at the nexus of the filaments. Ultimately, simulations suggest, that only half the dark matter particles are bound and associated with galaxies, and this method can only reveal the bound portion of the dark matter distribution, but nevertheless it is a start.

Simulations constructed by the Computational Cosmology group at ICRAR, are providing mock catalogues with which to refine and hone our final survey design. In particular, the Shark simulations proved by Dr Claudia Lagos and A/Prof Chris Power, have now allowed us to create a mock movie that shows the underlying dark-matter distribution (as defined by the bound dark-matter) particles, and overlain our ability to trace this structure through galaxies, galaxy pairs and galaxy groups. The chains of the observables clearly map the underlying dark matter structure, and in the sense allow us to directly "see" the underlying dark matter distribution.

This video shows the dark matter distribution in black, galaxy detections in cyan, galaxy pairs in red, and the dark matter halos defined by the galaxy groups in purple. The animation scrolls through a 50 square degree region of the Universe, starting from today and extending back to a look-back time of around 8 billion years ago.

The WAVES survey will commence in late 2023.

Observational Astronomer. Cosmic explorer. Empirical Scientist. I'm interested in mapping the distribution of mass, energy and structure from the Big Bang to the present day via large panchromatic (radio to X-ray) and spectroscopic survey programs. 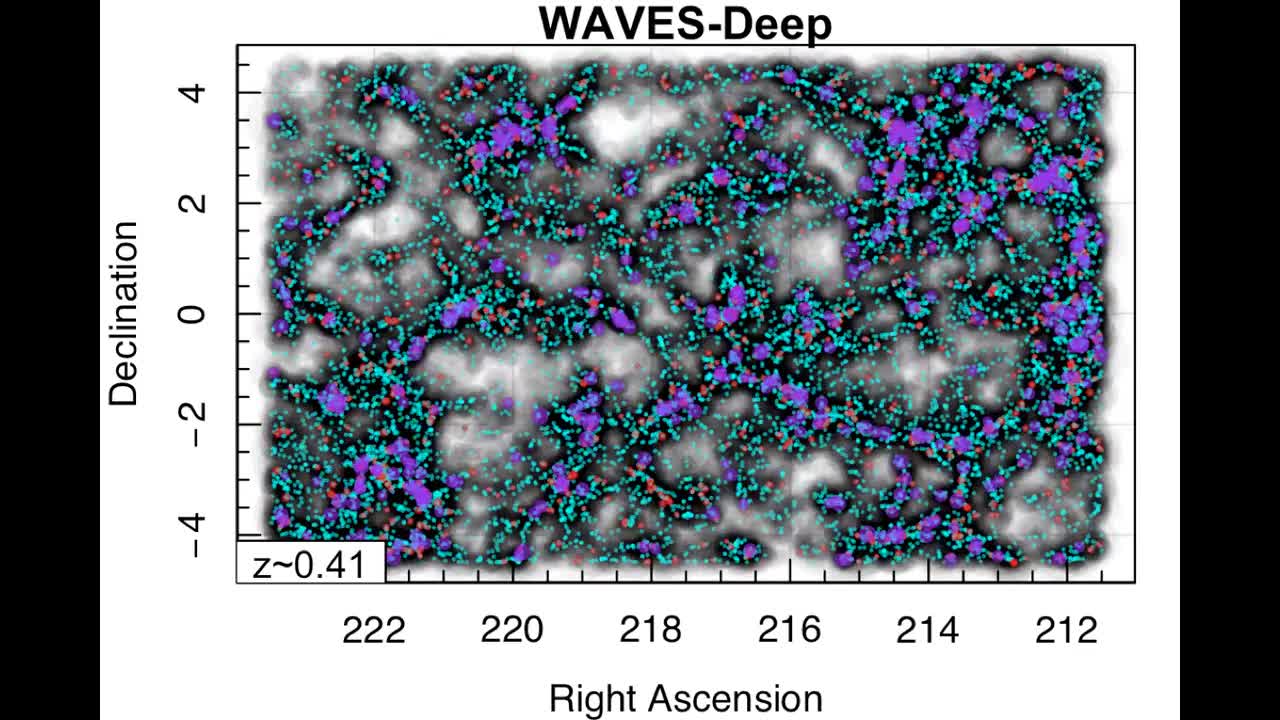 Dark matter remains elusive. With the next generation of redshift surveys we plan to directly trace and "see" the underlying dark matter distribution by identifying galaxy groups and pairs, and the filaments that connect them.